Pregnant women to get better info on drug risks 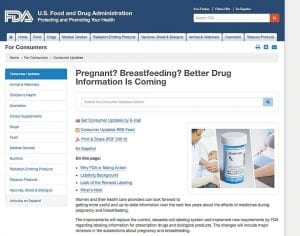 This is a screen shot of the Food and Drug Administration (FDA) webpage. Pregnant and worried about your medication? The FDA is revamping confusing labels on prescription drugs to make it easier to understand which are safe to use. Women who are pregnant or breastfeeding often agonize over whether a drug needed for their own health might hurt their baby, or even if the woman’s changing body requires a higher or lower dose. (AP Photo/FDA)

Pregnant women are about to get easier-to-understand information on how safe their medicine is for baby.

The Food and Drug Administration is revamping how lists any risk, scrapping a system that confused both doctor and patient in favor of spelling out what’s known and what’s not on the multipage labeling inserts that come with prescription drugs.

“More information about drugs will be provided than ever before,” Dr. Sandra Kweder of FDA’s Center for Drug Evaluation and Research, said.

There are more than 6 million pregnancies in the U.S. every year, and FDA says women take an average of three to five prescription drugs during pregnancy. They may have a pregnancyrelated infection or morning sickness. Or they may have an ongoing condition — asthma, diabetes, epilepsy or depression — that could dangerously worsen if they avoided treatment because of drug concerns.

Few medications have been fully studied to answer those questions, or even tell if the woman’s changing body requires a different dose. What information is available is hard to tease out. The FDA has long used a letter system — A, B, C, D and X — to convey risk, but admits that’s hugely misleading. A “B’’ drug might not really be safer than a “C’’ drug that just hasn’t been properly studied in people to tell.

Starting next summer, FDA said the official labeling for new prescription drugs will have a clearly designated section for what’s known about safe use during pregnancy and breastfeeding. Older drugs will phase in the new labels over the next three to five years.

The information won’t be on small pill bottles. It’s required to be on the official drug labeling that doctors are supposed to read when deciding to prescribe, information that often is passed to consumers as package inserts at the pharmacy.

Nor does the new rule apply to over-the-counter medications.

Still, “this is a huge step forward,” said Dr. Christina Chambers of the University of California, San Diego, who works with the MotherToBaby hotline that counsels worried callers about medications during pregnancy.

Under the new rule, the information “encompasses the larger picture of the safety data in the context of treatment, or lack of treatment,” she said.

Some medications do come with a lot of pregnancy information. Diclegis, for example, is the only drug to win FDA approval specifically to treat morning sickness. Doctors’ groups and the government recommend a flu shot for pregnant women, to protect themselves and because the baby is born with some of mom’s protection.

Other drugs are known to pose particular birth-defect risks. For example, the FDA requires versions of the acne drug isotretinoin, first marketed as Accutane, to be sold under special tight controls.

But many fall somewhere in the middle. Maybe they have risks only in the first trimester, when organs are forming. Or there simply may not be enough research to know.

Consider urinary tract infections, common during pregnancy. Some antibiotics are safe throughout pregnancy but require a dose change; others are supposed to be avoided in certain trimesters, noted Dr. Siobhan Dolan, an adviser to the March of Dimes, which for years has urged the FDA’s label move.

Another example: Pregnant women often are given old blood pressure medications even though new ones may work better, because the pregnancy impact of the newer brands hasn’t yet been studied, Dolan added.

The new labeling is supposed to offer details that Dolan said could help doctors and women weigh the known pros and cons with the unanswered questions. It must be clear if safety information comes from scientific studies of people, or only is predicted based on animal research. Registries that are collecting information on how pregnant women fare must be listed.

One section will provide information about how much of the drug collects in breast milk, and any effects on the baby.

A final subsection will say if the drug may impact future fertility when used by women or men of reproductive age.

If the drug hasn’t been studied for reproductive safety, the labeling must say so. While FDA isn’t forcing companies to do new pregnancy studies, Kweder said the changes will pressure them to add the most upto date information that’s available.

Easier-to-read information is only a first step, cautioned Cynthia Pellegrini of the March of Dimes — because many drugs won’t have much pregnancy information to list.

“This format will make even more clear how critical the need is for more human pregnancy data for all medications likely to be used by women of reproductive age,” agreed California’s Chambers.