Premier Elkhorn tipple is cited as being safest in United States 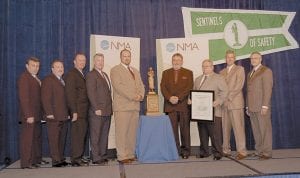 Premier Elkhorn Coal Company’s Burke Branch Tipple has been recognized for its outstanding safety record in the annual Sentinels of Safety awards program jointly sponsored by the U.S. Department of Labor’s Mine Safety and Health Administration (MSHA) and the National Mining Association.

The Burke Branch Tipple, located between Jenkins and Pikeville at Myra, won the “Large Coal Processing Facility Group” award for recording the most hours in a calendar year without a single lost-time injury.

The Premier Elkhorn Coal facility worked a total of 151,970 man hours without a single reportable injury or a lost time workday. The plant employs 79 persons.

A group of Premier Elkhorn employees traveled to Washington, D.C., recently to receive the award from Richard E. Stickler, assistant secretary of labor for MSHA, during a banquet at the J.W. Marriott hotel.

“It is clear that you are doing many things right and you are leading by example,” Stickler told the group. “You didn’t get here by luck. Your safety practices not only protect your employees – they can protect other miners as well. We at MSHA are happy to work with you to share those best practices throughout the mining industry.” 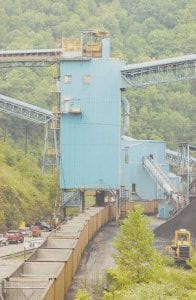 The Burke Branch Tipple, located between Jenkins and Pikeville at Myra, worked a total of 151,970 man hours without a single reportable injury or a lost time workday. (Photo by Chris Anderson)

The award consists of a large bronze trophy, with a statue of a woman and a child, depicting safety. The bronze trophy was created by Begni Del Piatta, a renowned Italian sculptor of the 1920s. This trophy is to remain at the Burke Branch facility for one year. The tipple was also presented with a large Sentinels of Safety flag.

Premier Elkhorn was one of 19 winners which worked a combined total of almost 2.7 million hours in 2006 without a lost-time injury.

“To put that in perspective, that would be an operation with over 1,400 employees working an entire year without a lost-time injury,” said Stickler. “That is an impressive number, and is a big step toward eliminating injuries.”

The Sentinels of Safety award is the oldest established award for occupational safety. The first one was announced by President Herbert Hoover – a former mining engineer – when he was Secretary of Commerce in 1925. The annual safety competition has continued to this day.

Premier Elkhorn is a subsidiary of TECO Coal Company, a division of Florida-based Tampa Electric Company.

Wilder says the management at TECO Coal gives companies like Premier Elkhorn the tools necessary to win honors like the Sentinels of Safety award.

“Premier Elkhorn has a customized safety program known as Safety and Accountability for Everyone (S.A.F.E.),” said Wilder. “It is very obvious that this program works, with the support from everyone in the company. Premier Elkhorn Coal has the support and resources, with upper management as well as all level of employees actively participating in the S.A.F.E. program.”