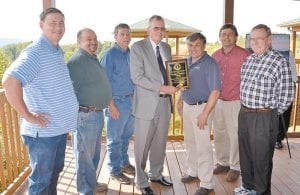 AWARD — Premier Elkhorn Coal Company received the Commissioner’s Award of Excellence in Reclamation for outstanding reclamation work at its surface mine in Letcher and Pike counties near Shelby Gap. Accepting the award from Carl E. Campbell, commissioner of the Kentucky Department of Natural Resources, were Stacy Billiter, an engineer; Superintendent of Surface Mining Jeff Cornett; Greg Hayes, a reclamation specialist; and Operations Director Don Hall. Premier Elkhorn established a diverse and permanent vegetative cover on the mined areas, and incorporated exfoliating bark species of trees for the protection of the Indiana Bat, which provides cover for all types of wildlife.