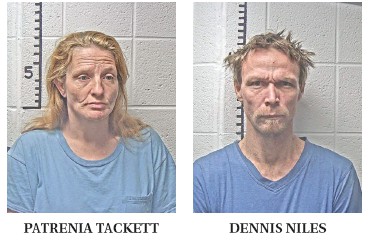 Police have charged a Premium couple with beating a woman unconscious and leaving her to die in a creek.

A passerby found Shannon Bentley on February 3 wearing a thin shirt and fleece pants lying in the creek at the head of Bee Tree Branch. The Good Samaritan pulled her out of the creek and called the sheriff ’s department. Bee Tree, at Premium, is a one-lane hollow that connects to Blair Branch at Jeremiah via an abandoned strip mine road.

Police have now charged Dennis Niles, 38, with first-degree assault, and Patrenia Tackett, 45, with complicity to first-degree assault. The two are in the Letcher County Jail. Niles and Tackett live in a trailer about 100 feet from spot where Bentley was found, police said.

Letcher County Sheriff Mickey Stines said when police and ambulance personnel arrived, the woman was suffering from severe hypothermia. She was taken to the Whitesburg ARH Hospital emergency room, stabilized and then flown to Pikeville Medical Center.

Authorities say the assault occurred on February 2 while the three were having a party at Niles’s and Tackett’s trailer. Drugs were involved, Stines said.

According to warrants, filed in the case, the couple beat Bentley “repeatedly and wantonly left her lying unconscious in the creek overnight in winter.”

Bentley, 51, of Sergent, suffered from exposure, contusions, a possible ruptured spleen and other internal injuries in the attack, warrants obtained for Niles and Tackett say.

“The last words the victim remembers hearing are Dennis Niles saying, ‘Leave her in the creek and she’ll freeze to death and we won’t have to worry about it,’” the warrant says.

A warrant Deputy Cory Harris obtained for Tackett says that at one point, Bentley was able to get away from Niles and hide. It says Tackett helped him find her.