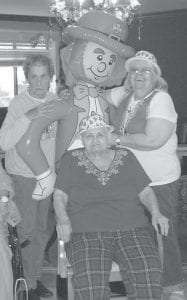 By the time this week’s Eagle comes out, April will be here.

With the few slightly warmer days, the forsythia bushes have popped out some yellow blooms and I have seen some white flowers blooming on some small trees. Not sure the variety since they were seen while driving in the car and I didn’t get to look up close. Early pear blossoms are also popping open. As you guess, I love spring flowers.

Don and Coreen Pridemore, aka Dad and Mom, celebrated their 60th wedding anniversary last Thursday. We had dinner at their home that day, a good country dinner of pork chops, roast beef, sweet potatoes, mashed potatoes, corn, beans and cornbread, and instead of a fancy cake we had old-fashioned butterscotch pie (yum) and a cake with boiled and whipped egg whites frosting.

Keitzi ( K. P.), Lana, Shane and Derrick, Bonita, Liberty, Lyndci and Sadie, me, Bob, Kenny Joe and Jessie all showed up to eat. Others were at work and school and couldn’t make it. We all enjoyed being together for such a momentous occasion.

Dad and Mom Say thanks to all who sent them a happy anniversary wish. I copied all the names off of Facebook who sent them well wishes and took them the list.

Also saw were Jim and Dosh Fields celebrated their 44th anniversary and best wishes to them also.

Rodney and Geraldine Ison both had birthdays last week and some of the family helped them celebrate.

Sunday, we attended church at the Association building at Sassafras. It was an odd weekend this month since March has five Sundays instead of four. After that, Blair Branch Church had services at Letcher Manor Nursing Home. The local folks who are patients love to see familiar faces when you go. I sat beside of Mary Blair and caught up on what was going on with her family. Wilma Pridemore and Vada Blair sat beside of Wilma’s mom, Irene Dixon. Vada Caudill and her daughter Jenny Ann sat behind us.

Coman Caudill spends most of the day sleeping now. I got a big friendly smile from Jimmie Faye Caudill, and as always a smile and a pleasant hello from Mabel Jo Buttrey and “Buggy” Viola Adams. Buggy was having some tests done at the hospital this week. I hope they came out OK.

Tommy Harris Smith and Mary Jo Blair were visiting sister Lillie Moss Hale and said she was having a good day. I am glad for her and them.

Alma Rose Blair is still recovering from her winter fall. She hasn’t been able to put pressure on her leg yet. We miss seeing her out and about and know her mom, Mattie Lou Back, misses her visits too.

Bob and I left the nursing home services and went over to Partridge way to visit with Eugene Shepherd. He was doing pretty well, just misses his wife, Mary, so much. I enjoyed listening to him talk of growing up on Kingdom Come Creek and how he worked hard all his life. He recalls being about 10 years old and driving a wagon and team of mules from his home to Whitesburg to get wholesale store supplies, which he delivered to two small grocery stores on Big Cowan. Also working at a young age in the log woods for his family and riding the mule back and forth to work.

I especially liked to hear him talk of how important the team of mules was to the livelihood of the family. Eugene said his feet froze in the stirrups many times and would have to be beat out to break them free. He said their father made sure before the mules were put away in the evening that all the ice was removed from their tails with water heated on the cookstove and a brush. Eugene said that was a job he recalled doing every time their tails were iced up.

It’s so hard to believe what a tough way of living people a few generations back had to do just to survive the hard times. Eugene is in his 90s and still remembers it well and especially how amazed the long gone store clerks were that such a small boy could work a team of mules and the wagon so well.

There are not many old timers like Eugene to tell these tales anymore and I wish I could remember the names of the old stores and their clerks as well as I do the mule stories.

Our brother- in- law Densmore Goodson lost his father on Sunday. He had been sick for some time and a patient at the Hazard hospital. Densmore is married to Bob’s sister Irene.

We’ve been watching the progress of a new tin roof being put on our neighbor, Stella Elam’s, home. Richard Hampton has been working on it when the weather permits. Since we’re high on the hill above Stella’s, it’s hard to miss seeing it.

Tyler Watts has also had a group of family and friends putting a new roof on the old John M. and Mary Blair store building. It’s been empty for a long time now and had fallen in disrepair, so a new roof will prevent any more water damage and they can fix it a little at a time.

And on a final note, lots of UK basketball fans have been glued to the TV lately watching and rooting for the Cats. So far so good.

Lana Pridemore, her daughter Amber, and their friend Leslie Cumptan went to Indiana to watch the Friday night game and then gave their tickets to Glenna Faye and Austin Quillen, who were going to the Sunday game.

Homer and Ruth Smith’s son Roger also had a birthday a few days ago. Belated birthday wishes to him.