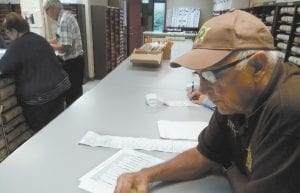 ELECTION COUNT – Sheriff Danny Webb counts votes in the county clerk’s deed vault on election night. Webb, who was elected the first time in 2002, did not file for re-election. Four of his deputies were running for sheriff, jailer or constable in the primary, and a fifth will run for sheriff as an independent in the fall. One of the sheriff ’s duties is acting as election officer. (Photo by Sam Adams)

Letcher County has a new jailer and will have at least four new magistrates and a new circuit clerk.

When the votes were counted Tuesday night, Bert Slone, a longtime deputy sheriff and currently school resource officer at Letcher County Central High School, fended off four opponents to win the Democratic nomination for jailer by 597 votes ahead of his nearest competitor, Deputy Jailer Luther Tackett. He has no challenger in the fall.

One of the most closely contested races was the Democratic race between two deputy sheriffs, both vying to be the new sheriff after the retirement of Sheriff Danny Webb at the end of this term. The leader in the race changed several times as new precincts totals were added, but in the end, Mickey Stines, a long-time district court bailiff, took 2,310 votes to 2,140 for Carlos Eugene Slone, the department’s victim advocate and neighborhood watch liaison. Former Whitesburg Police Chief Roland Craft finished with 239 votes. Stines will have two opponents in the fall. D.L. Hammonds is running on the Republican ticket, and Capt. Barry Engle, currently the chief deputy sheriff and a retired state trooper, is running as an independent.

The other close race of the day was for property valuation administrator. Ricky R. Rose, a 22-year veteran PVA employee under the late Randy Hall, edged out real estate agent Randy Blair by just 2 percent, 2,309 to 2,237. Rose will face Republican Richard Brown, who was appointed to the office after Hall’s death, in the November election.

The only magistrate with a chance of returning in the fall is District 1 Magistrate Bobby Howard. A Democrat, Howard beat former District 1 Constable and Deputy Jailer Ben Fields by 91 votes, 497 to 406. Howard, who owns a heating and cooling sales and repair business, will face Republican Jack Banks, a nuclear medicine technologist, in the fall.

In District 2, Sherry Sexton, who works in the Letcher County Schools central office, narrowly beat out Don McCall, who did not seek reelection as jailer, and instead ran for magistrate. The unofficial vote total was 230 to 218. Mike Hall, the nearest challenger in the five-candidate field, won 124 votes. Sexton, a Democrat, will face Republican Brad Collie, a produce store and pawn shop owner, in the fall. Collie defeated two others in the Republican primary, topping Roger Nease 176 to 100, with Jessica Brown finishing a distant third with 35 votes.

Incumbent District 2 Magistrate Terry Adams chose to run for Judge/ Executive instead. Adams beat Mica Smith Johnston 1,003 to 548 in the Republican primary. He will face incumbent Judge/Executive Jim Ward, a Democrat, in the fall.

In District 3, Emory “Fudge” Mullins, a florist from Neon, beat sitting magistrate Woody Holbrook 416 to 374. Former magistrate Codell Gibson finished with 205 votes. On the Republican ticket, Maverick Cook won 54 percent of the vote in a three-way race. Cook won 195 votes to 99 for Dallas Adams, and 65 for Leonard Tackett.

Court of Appeals Judge Gene Smallwood of Whitesburg won the county with 4,543 votes, 76 percent of the total against five challengers, however he lost the district to David Allen Barber and Larry E. Thompson. Smallwood was appointed to the post earlier this year by Gov. Matt Bevin.

Other unofficial totals were: