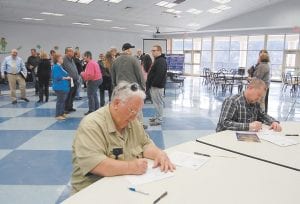 PRISON BOUND FOR LETCHER? At least 355 Letcher County residents attended a public meeting held by the Federal Bureau of Prisons on March 12 in the Letcher County Central High School cafeteria. The meeting was to discuss the Draft Environmental Impact Statement for a proposed Unites States Penitentiary and Federal Prison Camp. (Photo by Sally Barto)

The decision of whether or not a federal prison will be constructed in Letcher County could be announced within the next few months.

The Federal Bureau of Prisons’ (BOP) Final Environmental Impact Statement (FEIS) for a proposed Unites States Penitentiary (USP) and Federal Prison Camp (FPC) in Letcher County could be completed and released by summer, according to Tom Webber, BOP chief of Capacity Planning and Construction Branch. If BOP officials decide to locate a federal prison in Letcher County, the FEIS will include the preferred site — about 753 acres in Payne Gap owned by Pike County road builder Leonard Lawson or 700 acres in Roxana owned by Rondall Meade and Sherwood Ison.

Cristina E. Ailes, an environmental scientist with Cardno, an infrastructure and environmental services company, said 335 citizens attended a public meeting in the Letcher County Central High School auditorium on March 12 to discuss the Draft Environmental Impact Statement (DEIS) and the BOP’s proposal. Bureau representatives were on hand to talk about the proposed alternatives, the proposed action, and the environmental effects.

If the Payne Gap site is chosen, wastewater and natural gas infrastructure would be significantly impacted.

Construction at both sites will have adverse impacts to traffic, as well as an impact to roadways at Roxana. Potential roadway improvements would be required at both sites, according to the DEIS. A traffic impact study will be included in the FEIS.

In addition to the two facilities, the site would include a central utility plant, a firing range, two warehouses and a staff training building.

After the FEIS is released, there will be a 30-day period to review the document, Webber said. Then the BOP director will sign the Record of Decision.

Contingent on funding, the BOP would then acquire a design/build contractor to construct a facility.

Webber said the cost of building a federal prison camp in Letcher County is $460 million to $510 million.

“The issue right now is getting funding for the project,” said Webber.

Webber said most areas considered as a future location for a federal prison have local officials or community groups approach the BOP with proposed sites. With the assistance of U.S. Rep. Harold “Hal” Rogers, the Letcher County Planning Commission, which is a group of local business leaders and concerned citizens, decided nearly a decade ago to advocate for a federal prison to be built in Letcher County to bring jobs to the area.

“They have been very helpful in assisting us in any way they can,” said Webber.

Elwood Cornett, chairman of the Letcher County Planning Commission, has served as the point of contact for the BOP and is regularly updated by Webber on the status of the proposal. Cornett said he received positive feedback in regards to Thursday’s public meeting.

“The folks from Washington seemed pleased with the numbers,” said Cornett.

Webber said the attendance at the public meeting was higher than similar public meetings hosted by BOP officials held in other areas.

“We typically don’t get a turnout like that,” said Webber. “The support for the project is considerable.”

The main reason for building a federal prison in Letcher County is to reduce crowding at other federal facilities, Webber said.

“Anything we can do to reduce crowding is helpful,” said Webber.

Cornett visited a federal prison and he said it was secure.

“I can see where they just can’t get out of that place,” said Cornett.

“It makes your community even safer,” said Gaston.

If the BOP decides to build a prison in Letcher County, jobs will be created during the construction phase in addition to employment at the prison. Gaston said 50 to 60 percent of jobs are held by people who live within a 100- to 150-mile radius of the prison.