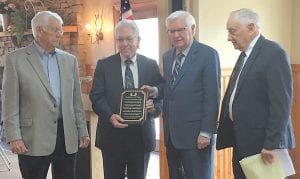 U.S. Congressman Hal Rogers likens his work with the Letcher County Planning Commission for the past 12 years in procuring a federal penitentiary and prison camp in Roxana to a good ping-pong match.

“It was a good ping-pong match that lasted for a long time that worked out to be successful,” Rogers said. “At every turn, every hurdle, it was clear that this group would not give in. They would not take no for an answer.”

“That was about the last thing I wanted to consider at that time, but then I began to do research,” said Elwood Cornett, chairman of the Letcher County Planning Commission.

Cornett said he had initial concerns about inmates escaping from prisons, but learned that federal prisons haven’t had any escapes.

“It’s safe,” Rogers said April 6. “We have never had an escape from a federal penitentiary. Never. It is safe and you can assure your neighbors and friends of that.”

The idea of 300 new jobs in addition to a federal prison purchasing materials and contracting work locally during the construction phase were reasons the planning commission decided to contact the Federal Bureau of Prisons (BOP).

“These jobs will be good paying jobs, federal benefits, retirement, health, security,” said Rogers. “This prison will not be bothered by a recession. It will be there through thick and thin.”

Rogers said BOP will bring in most of the people who will run the prison when construction is completed.

“Over the course of time as they replace those professionals, they’ll replace them with local people,” said Rogers. “It takes time but that is just the way BOP operates. I don’t know of a better ran federal agency than the Bureau of Prisons. Now they are slow, slow as molasses but they are thorough. They try to do the right thing.”

Cornett said the first conference call with Bureau of Prisons staff was “not very positive at all.”

“They did not want to come here,” said Cornett. “They want to go where they can land and visit and fly back and so forth. But you see the federal government hires a lot of people to do their work and it appears to me that Letcher County folks have as much of a right to do some of that work as anybody else.”

The Bureau of Prisons made two visits to Letcher County in 2006, which Cornett said weren’t positive.

“About that time, our congressman had $5 million put in the federal budget in 2006 for testing and studies that needed to be done,” said Cornett. “At that time I didn’t even realize the significance of that, but I do know and he did of course all the way.”

A few years went by with no progress toward the goal of obtaining a federal prison. In June 2008, Rogers asked some of the planning commission to meet with him in Washington, D.C.

“As they began to say Letcher County doesn’t have a single site feasible, we realized we couldn’t let this stop,” said Cornett. “We defended ourselves good and the final part of that meeting was Hal saying to them ‘Now look. Get this thing going.’ In just a few days things began to happen.”

Cornett credits Rogers for rescuing the project at least four times in the past decade.

Of the four federal prison projects Rogers has been a part of, Rogers said the proposed prison in Letcher County has been the toughest.

“It took us longer to do this one than the others,” said Rogers. “Nothing to do with Letcher County, it’s just that the administration was not going to build prisons, even though federal prisons are terribly overcrowded. So we had to overcome that.”

“Elwood has worked so hard to bring this prison here,” he said. “I think he knows more about the Bureau of Prisons than they do. That’s not saying a hell of a lot. Of course, Don Childers has never been shy about making sure this project stayed on our radar. He’s been a longtime advocate for the people of this wonderful county.”

Rogers said the work ethic in Letcher County was a big inducer for the decision to build a prison in Roxana.

“ The bureau told me this project received the most positive community feedback in their history,” said Rogers. “You got more comments that anybody in the country ever did with BOP. They said they were overwhelmed by hundreds of positive comments and just a handful of complaints. I want to commend and applause the planning commission for pushing this project day in and day out, year in and year out for the last decade.”

In February, U.S. Attorney General Loretta Lynch publically confirmed that $444 million will be used to build a new prison in Letcher County.

“She said it will help reduce overcrowding, which it will,” said Rogers. “It will improve correctional officer safety as well as inmate safety.”

A Revised Final Environmental Impact Statement, which was published April 1 in the Federal Registrar, is available for public review at all of the Letcher County public libraries. A 30-day review and comment period will end May 2. All comments received before the May 2 deadline will become part of the administrative record and will be considered in connection with the record of decision, said Justin Long, office of public affairs information, policy and public affairs division of the Federal Bureau of Prisons.

“As a result of comments made by the public to the original Final Environmental Impact Statement (FEIS), it was decided to clarify some areas of the FEIS, including but not limited to, potential water quality impacts, additional information on existing conditions at a formerly mined site, inconsistent statements as to whether the firing range would be an indoor or outdoor range, and clarification that the air emissions calculations included in the FEIS had been performed prior to removal of UNICOR operations as part of the proposed action,” said Long.

Impact Statement makes no change to the proposed action, which is to acquire the property and construct and operate a new United States Penitentiary and Federal Prison Camp, ancillary facilities and access roads at the preferred alternative at Roxana, said Long.

“I’m pleased that the BOP plans to proceed as planned,” said Rogers.

Rogers said he is waiting for the Record of Decision to be signed, which Rogers describes as the green light.

“You’ve jumped every hurdle that can be placed in your path,” he said. “You’ve stayed with it. You’ve passed those hurdles. We can finally begin looking forward to the first phase of the project, which includes facility design and infrastructure, putting water and sewer in place.”

Long said these steps could be completed in approximately four to six years.

“There are many variables that might affect the timetable for a proposed project such as the acquisition or purchase of the property from the property owners, the topography of the site, utility issues, and the climate and weather conditions at the site,” said Long.