By BRETT BARROUQUERE
The Associated Press 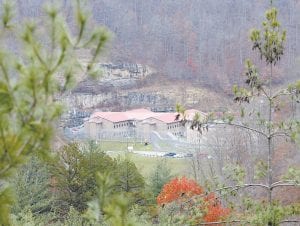 The Otter Creek Correctional Complex is seen nestled in the hills at Wheelwright in Floyd County in this file photo from late 2009. The prison is set to close later this year. (AP Photo/Ed Reinke)

After a sex scandal at a privately run prison in Floyd County, the state cut off the institution’s funding and now it’s shutting down — and that worries officials in the town of Wheelwright where incarceration meant jobs and economic survival.

With Otter Creek Correctional Center set to close in the coming months, Mike Goeing, who runs Family Drugs of Wheelwright, sees pain ahead for his store and the other few remaining businesses in the town of about 1,200.

The prison, run by Nashville, Tenn.-based Corrections Corporation of America, is set to close by this summer as Kentucky pulls its inmates out of the facility that was at the center of a sex scandal. It broke in 2009 when inmates accused prison staff of forcing them to trade sexual favors for privileges.

The prison became a casualty of budget cuts and a renewed effort by the state to push more nonviolent drug offenders into rehabilitation instead of incarceration.

Kentucky opted not to renew its contract with CCA as part of an ambitious plan to cut costs, reduce the number of small-time, non-violent drug offenders in prison and refocus efforts on rehabilitation. The men currently held at Otter Creek are being moved to Northpoint Training Center in Burgin.

People in Wheelwright are hoping for word that another state will step in with a new batch of inmates, reopen the facility and rehire the employees.

Elk Horn Coal Company founded the city in 1916 and named it for the company’s then-president, Jere H. Wheelwright.

As coal production slowed, the area’s economy went with it. Businesses closed or struggled to stay open.

The prison brought nearly 200 jobs to one of the poorest regions in the South when it opened in 1981. CCA paid employees $8.25 an hour — low pay by prison standards but welcome cash for the area.

“It helped the few businesses that remain here,” said Goeing, who used to deliver medications to the prison.

Without the prison jobs, Wheelwright Mayor Andy Akers says people will lose their steady income and stop spending money in the area.

“It’s going to hurt the grocery stores, the restaurants — just everything where the guards are used to spending their money,” Akers said.

The prison once housed women from Hawaii and Kentucky. In January 2010, after the scandal broke, Gov. Steve Beshear ordered the women removed from Otter Creek. The state transferred 400 female inmates to Western Kentucky Correctional Complex in Fredonia and moved men into Otter Creek.

Hawaii removed 168 female inmates in 2009, sending them to a prison in Arizona. Multiple lawsuits were filed over the sex accusations. Most were dismissed.

None of that slowed CCA down. In the last five years, the company announced contracts to build new private prisons or expand existing state and federal facilities in more than a half-dozen places ranging from Mississippi to Nevada. CCA spokesman Steve Owen said the company, through Otter Creek and other private prisons, “drives economic growth in any community where it operates.”

Alex Friedmann, a convicted armed robber turned inmate advocate, spent six of his 10 years in prison at CCA facilities. He said the closing of Otter Creek is part of a shift by some states to lower incarceration rates and save money on prison costs. Friedmann noted that CCA recently closed a facility in Appleton, Minn., and hasn’t found a new client for it. He said they also stopped building a prison in Tennessee for want of a client.

“The only thing interesting to CCA is can they generate a profit because they are a for-profit company,” said Friedmann, who now lives in Old Hickory, Tenn. “There’s a social cost … when you have communities dependent on incarceration as a business model. That’s a very dangerous thing.”

For Wheelwright, though, Otter Creek is a rare economic bright spot.

“Jobs are few in the mountains,” said state Sen. Johnnie Ray Turner, D-Prestonsburg. “We’re going to have to try to do something.”

Turner said Kentucky and CCA must find an alternative use for the prison, either leasing it to another state or converting it to a rehabilitation facility. Until something happens, Turner, who also represents Letcher County, said he expects lots phone calls from people looking for help finding work.

Kentucky House Speaker Greg Stumbo, D-Prestonsburg, hopes something can be done to reopen the prison soon.

“I supported making this a state-owned facility and will continue to do so,” Stumbo said.

Owen said employees were given an opportunity to stay with the company, either at the Lee Adjustment Center in Beattyville, where Vermont houses roughly 800 inmates, or at the Marion Adjustment Center in St. Mary’s, where Kentucky houses about 800. Owen said employees were also given a crack at openings at one of CCA’s 60 other facilities across the country.

“CCA will continue to market Otter Creek to potential government partners with the hope of reopening the facility,” Owen said.

Akers, the mayor for the last 18 months, said that’s a positive sign.

“I don’t think they’re going to be shut down that long,” Akers said.