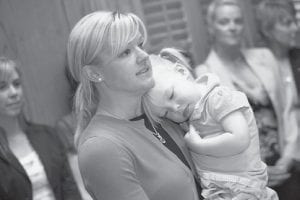 Jessica Corry held her 2-year-old daughter, Caroline, during a news conference to launch the Women’s Marijuana Movement in the State Capitol in downtown Denver. (AP Photo)

Moms got tougher drunk-driving laws on the books and were directly responsible for passing and then repealing alcohol Prohibition. Now marijuana activists are trying to enlist the nation’s mothers in legalization efforts with a sales pitch that pot is safer than booze.

These marijuana moms argue that pot is no worse than alcohol, that teens shouldn’t face jail time for experimenting with it and that marijuana can even help new mothers treat postpartum depression.

“I know so many mothers who support this but aren’t willing to come out and say it,” said Sabrina Fendrick, head of the Women’s Alliance at the Washingtonbased National Organization for the Reform of Marijuana Laws, or NORML.

Marijuana activists say they need more moms to publicly back pot use if they are to succeed with public officials.

“The mother is the first teacher, who you turn to for direction in life,” said Serra Frank, a 27-year-old mother of two, who founded Moms4Marijuana in 2005. It has no formal membership, but Frank says its website has had more than 12,000 visitors.

Pot activists say both genders sometimes find it easier to attend protests or lobby lawmakers about pot than to tell their mothers they smoke weed. So legalization groups hope that if moms, arguably the nation’s most powerful lobby, get on board with making pot legal, laws will change in a hurry.

“All the things moms get behind, people listen,” said Diane Irwin, 48, a medical marijuana grower who also is a mother of two.

“We have enough problems with alcohol. I feel if we legalized it, it would make people say it’s OK,” said 37-year-old mother Amanda Leonard, one of the poll respondents

Trying to soften moms up a bit, Denver-based Safer Alternative For Enjoyable Recreation, or SAFER, is asking members to “come out” about their pot use this Mother’s Day and argue that pot is safer than booze. The group says it has about 20,000 members nationwide.

SAFER’s online Mother’s Day card had a typical start — “Thank you for raising me to be thoughtful and compassionate” — then transitioned to: “I want to share some news that might surprise you, but should not upset you: I believe marijuana should be legal.”

For $10, card senders can add a book for their moms titled “Marijuana is Safer.” The book, published last year, argues that marijuana is healthier than booze. SAFER says several thousand copies have been sold, and group members handed out free copies as Mother’s Day gifts to Colorado’s 37 female lawmakers last week.

There’s no good national count of how many mothers use pot, but anecdotal evidence suggests plenty do. Moms from Florida to Washington are facing criminal charges for using marijuana or supplying it to their children.

In February, 51-year-old Alaska mom Jane C. Cain was arrested along with her 29-year-old son for allegedly growing pot in the house. Cain says she initially feared reprisals from neighbors and didn’t answer the door.

“But it turned out people were just coming by to bring homemade food, casseroles and cakes and such,” Cain said with a laugh. Her case is still pending, but Cain says that even conservative neighbors say she’s not wrong to use marijuana for her frequent migraines, though medical marijuana isn’t legal in Alaska.

“Now I go wherever I want and hold my head up high,” Cain said. “Five or 10 years from now, people who oppose marijuana will be considered old-fashioned. It’s a benign substance, so why shouldn’t we have it?”

Irwin, the Colorado medical pot grower, said mothers who use marijuana face a stigma men don’t. Irwin says she secretly used marijuana while pregnant to fight morning sickness and after giving birth to battle postpartum depression. Since she started growing pot, Irwin said she’s run into many moms who admit to using the drug. She argues that even children could benefit from marijuana use, though Irwin never gave either of her kids pot nor smoked it in front of them.

In fact, she remembers flushing her son’s pot down the toilet when he was a teen. But last year, after her now-grown son started a Denver marijuana dispensary, Irwin sold her hair salon, bought a greenhouse and started raising pot for him.

“I look at the kids now who are so medicated, on Ritalin and all the rest, and I’m wondering why we don’t explore what’s natural, and that’s marijuana,” said Irwin, who is moving to Denver to work full-time at her older son’s dispensary.