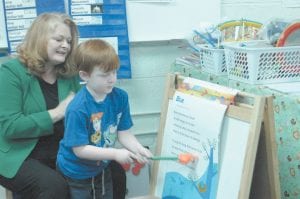 The school day is just beginning at 8 a.m. on Presidents’ Day and the five students in the structured learning classroom at Fleming- Neon Elementary School know exactly what to expect for the day. They have their schedule laid out before them and are ready to begin “circle time”.

Liz Williams, a special education teacher, says students with autism are visual learners who want to know what it is they have to do, how much they have to do, when they are finished and what is next.

Williams said if she keeps these questions answered throughout the school day her students are content.

“They are calm and they’ll do what you want them to do,” she said. ”If you take one of those four things out, you will have behavior issues.”

Every morning Williams goes over the large picture schedule, which answers those four questions.

The five students, one is absent on this particular day, sit in a semicircle and listen as Williams begins circle time, which lasts about 50 minutes. She has every task they will do in circle time displayed on the dry erase board and she will move each item to the finished category once it has been completed. Some of the students have their own smaller schedule on a clipboard so they can follow along with their teacher.

They stand up and recite the Pledge of Allegiance. There is also a weather report and calendar time. Students count and practice their alphabet. “U” is the letter of the week. They also listened to a book about Presidents’ Day and some of the students were excited when they recognized a picture of their president and said “Barack Obama”.

They sang songs about each color in the rainbow. After every task in circle time was finished, students were ready for breakfast.

Williams said the class has come a long way since it was created in the spring of 2010.

Scott Teague, the district’s director of special education, had heard from several teachers and principals that they wanted more information about teaching children with autism. He said instructors were at odds as to what type of environment in which they needed to be and what type of curriculum they needed.

“They were having difficulty understanding the characteristics of autism,” said Teague, who had been a part of a similar program in Whitley County.

The exact cause of autism is unknown. Researchers say genetic factors outweigh environmental factors, including certain foods, infectious disease, solvents, diesel exhaust, heavy metals, pesticides, xmoking, illicit drugs, alcohol and vaccines. Vaccines have drawn a lot of media attention because parents may first notice their child displaying autistic signs near the time of routine vaccinations. According to a medical website, UpToDate.com, no scientific linkage has been established between autism and childhood vaccines.

“ We were seeing kids with autism thrown into the general classroom setting,” said Williams. “It is too overwhelming. There are meltdowns and it is a horrible experience for them. There are a lot of students with autism in the district who were having extreme difficulty meeting demands in a general education setting.”

Teague said Williams was a good candidate for the program because she had a pretty extensive background, training and knowledge in the field of autism.

In the fall of 2009, the district formed an autism spectrum disorder support team, which consists of an occupational therapist, a physical therapist, a speech therapist, Teague and Williams.

Each school compiled a list of students who may qualify for a more structured learning environment. Twelve students were evaluated and ranked by the severity of their needs. Williams said one of the main criteria they looked for was if the child has the potential to transition into a regular classroom and be successful. Seven students were chosen to participate in the class and by state regulations, eight students are allowed in the class. The minimum number of aides required in the classroom is three.

Stimulus funding was used to purchase equipment and materials for the class.

Students started slowly transitioning into the structured learning classroom in March 2010. The students range in age from four to nine years old. The school day lasts from 8 a.m. until 2 p.m.

“We take them and teach them the skills they will need to be successful in the general classroom setting,” said Williams.

Teague said the classroom is different from other classrooms in the district.

“It is pretty unique as far as this area in the way it is set up,” he said.

Teague said the classroom was placed at Fleming-Neon Elementary School because adequate space was available.

“We have gotten good feedback from parents, grandparents and guardians of the students,” he said.

Teague said parents have described the class as a “lifesaver” for them and their children.

“This will change their lives in a positive manner,” said Teague. “I think this was a great opportunity for us as a school system and for the students to help them adjust, grow, adapt and be safe, healthy and independent people.”

He said students are progressing in social interactions and speech communications as well as an improvement in eating habits.

“It has been a positive addition to our district,” said Teague. “The theory looks as good as what happens in reality.”

Teague said the students in the structured learning classroom are younger students because educators wanted to work on some specific learning strategies with them at an early age. If funds are available, he said the district would like to create a classroom for middle school students diagnosed with autism.

Williams said when she first began teaching the class, circle time lasted about 15 minutes. Some of the students wouldn’t go near the dry erase board and would not sit down. Over time Williams increased circle time to 30 minutes and then to 50 minutes.

Sensory breaks are taken throughout the day to calm or rejuvenate students.

“Autism is a neurological disorder that affects the way the brain processes,” said Williams. “(The students) are all different but have similar characteristics.”

Williams said the two main areas children with autism have difficulty is communication and socialization.

Williams said it is also important to introduce new concepts.

“ When we have them in a small setting, we can do things at a gradual pace to show them that change can be a good thing,” she said.

Williams encourages students to play together and share as well as engage in conversations. They work on fine motor skills, handwriting, and art. Students enjoy computer time. Some of the computer software is designed specifically for autistic students.

Williams has discovered through trial and error that generally her students don’t like a lot of verbal explanation.

“We tone down the verbal and increase the visual,” she said. “If you can pull in those strengths and teach them, they pick up concepts very easily, retain it and apply what they have learned.”

Two of the youngest students know all of their letters, numbers and sounds.

“To have picked up all of that information with their difficulties is amazing,” said Williams. “It just goes to show their potential once the barriers are removed. These kids are brilliant. They are some of the most intelligent students I have ever worked with.”

Paul Brandon Fields said his son, Brayden, 4, spoke gibberish and didn’t have much of a vocabulary before he started attending the structured learning classroom. Now he can say several words including ostrich.

Fields said he noticed his friends being called Dad by their sons, but he never heard Brayden say Dad until he was four years old.

“That was great,” said Fields, of UZ. “I give credit to that class. I say that program is a blessing.”

“To this day I have never heard my child say he is hungry,” said Fields. “You learn so much about body language and facial expressions. The little things people take for granted are so important.”

Brayden can count to 40. He knows the alphabet and can identify colors.

Brayden was diagnosed with autism before he turned three.

“They say there is no real cause and have ruled out vaccinations,” said Fields. “To me the most common factor is the twelve-month shot. Did it cause it? I don’t know. I can’t say it did. It happened around that time.”

Fields said autism is a spectrum disorder with many different degrees. While being tested for autism, Brayden showed signs of the disorder by walking on his tiptoes, doing a one-hand clap and not answering to his name.

In the structured learning classroom Williams and her aides help the students express their feelings.

“This is really a good thing,” said Williams. “If they didn’t have this they would have to go into a regular classroom and it would be traumatic for some of these kids.”