By LAURA UNGAR
The Courier-Journal 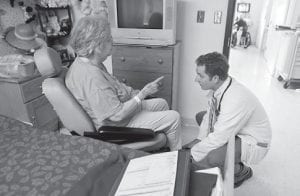 Though he is only 25, his pronouncement that “Everything looks good,” brought a smile to the face of Davis, a 61-year-old multiple sclerosis victim who’d recently been hospitalized with pancreatitis.

“Thank you for caring,” she said, touching Sherman’s sleeve.

Sherman, who is in his third year of medical school at the University of Louisville, is working with Dr. Winston Yap of Bedford Family Practice as part of a program designed to bring more medical professionals to rural and under-served areas of Kentucky.

Doctor shortages are a longstanding and worsening problem in largely rural Kentucky, and some health care experts say they may continue to worsen as tens of thousands of additional Kentuckians become insured under health care reform.

“It’s going to be a crisis in 10 years,” said Dr. Baretta Casey, director of the Hazard-based University of Kentucky Center for Excellence in Rural Health and a supporter of programs like the one that Sherman is involved in, through the local Area Health Education Center.

Experts expect healthcare reform legislation to bring more money to programs such as the nation’s more than 200 health education centers. In Kentucky, the centers are a collaborative effort between U of L and the University of Kentucky, which each have program offices and each direct four regional offices.

According to the American Academy of Family Physicians, the reform legislation includes provisions to boost the physician workforce, such as reauthorizing part of a law that increases funds to family medicine residency programs.

Dr. Faye Jones, program director for the U of L education center, said she expects and welcomes additional support. Her center’s budget of $1.5 million has decreased about 20 percent over the past five years as the problem it addresses has grown.

According to the U.S. Health Resources and Services Administration, Kentucky has 145 areas without enough primary care health professionals, including 42 whole counties in various parts of the state.

The rural rotation program “has always been important, but I think it’s growing in importance,” Jones said. “In the middle of downtown (Louisville), we have plenty of doctors. But the doctor shortage is a big problem in rural areas.”

Casey agreed, noting, “Continuing to have (health education centers) is paramount. I think we really have to realize how important it is to have rural medicine be part of every medical student’s experience.”

Casey said she participated in the program when she was in medical school, doing a rotation in Pikeville that helped convince her to devote her career to rural medicine.

“It absolutely was a great experience,” she said.

Even before health care reform was passed, the Association of American Medical Colleges projected that the United States would face a physician shortage of 124,000 to 159,000 by 2025 as the population ages.

A rise in insured patients could increase the projected shortfall by 25 percent, the organization said with the greatest impact in rural or inner-city locations designated by the federal government as health professional shortage areas.

When it comes to primary care, the federal government estimates that Kentucky has an underserved population of 499,905 people, more than 10 percent of the state’s population.

Jones said one important way to produce a new generation of rural doctors is to expose as many medical students as possible to rural medicine. In 2008-2009, she said, 349 U of L medical students did four-week rotations through her program, and this year, the program is on track to have more participants.

Alan Kerr, a third-year student, did a rotation last November at a primary care office in Glasgow, where he saw patients in the office and the hospital and met with addicts in a 12-step meeting.

“Every single case I had, there was a learning experience,” said Kerr, who plans to go into hematology and oncology.

Although Kerr, 30, hopes to practice in Louisville, he said the rotation inspired him to plan “clinic days” in rural areas.

Unlike urban specialists, family practice doctors in rural areas often care for patients with a variety of problems in a variety of settings, giving medical students who shadow them a wide range of experience.

Sherman, for example, sees patients at Yap’s office, at area hospitals and at the local nursing home, where on a recent day health issues ranged from a diabetic coma to an eardrum punctured by a Q-tip.

Davis, the nursing home patient, said she didn’t mind being part of the teaching process.

“It’s a wise way to let them learn things,” she said. “You’ve got to have handson learning.”

Sherman, whose rotation is four weeks long, never treats patients alone. Patients are asked whether they would mind being seen by a student. If they agree, Sherman examines them, then consults with Yap about his findings before Yap examines them.

On a recent morning, Yap also had Sherman write referral letters to specialists and fill out nursing home admissions paperwork.

“I’m liking it a lot,” Sherman said. “It’s such direct interaction with an actual physician.”

Yap said he enjoys his mentoring role, and has helped with the rural rotation program for more than a decade.