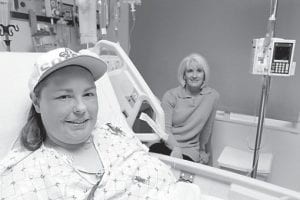 Too often, would-be kidney donors are wasted because the friend or loved one they want to help isn’t a match. Now a new national database promises to help find matches for those frustrated pairs so they can be part of so-called kidney exchanges and cut the wait for a transplant.

If the long-awaited pilot project by the United Network for Organ Sharing pans out, specialists predict it eventually could result in an extra 2,000 to 3,000 transplants a year through “kidney paired donation,” where someone donates a kidney on a patient’s behalf so they can receive a compatible organ from someone else in return.

Kidney paired donation is increasing but still rare — with more than 760 performed in the last three years — and patients today often must track down participating centers on their own and travel hundreds of miles for surgery.

“I do have friends that are on dialysis that can’t afford to come this far to receive a transplant,” says Heather Hall, 31, of Denham Springs, La., who was one of 16 patients to receive a new kidney during an unusually large exchange two weeks ago at Georgetown University Hospital in Washington.

Born with bad kidneys and needing her third transplant, she read about Georgetown’s program after doctors in Louisiana said she’d become too hard to match. Her aunt donated on her behalf.

The UNOS project, which began last month, is part of a broader effort to increase kidney paired donation, considered one of the best bets at boosting live-donor transplants — the optimal kind. Some transplant centers already have formed regional alliances to mix and match larger numbers of patients and their wouldbe donors. Even some small hospitals are making a name for themselves by amassing lists of potential swappers.

Of the more than 87,000 people on the yearslong national waiting list for a kidney, at least 6,000 instead could qualify for a kidney swap if only they knew about that option, Bingaman recently wrote in the New England Journal of
Medicine.

Fewer than 17,000 kidney transplants are performed in the U.S. each year, and just over a third are from living donors, relatives or friends who happen to be biologically compatible.

Without their own donor, patients await a cadaver kidney — and nearly one in three patients may never get one because their immune system has become abnormally primed to attack a new organ, says Georgetown kidney transplant director Dr. Keith Melancon. Black patients are most at risk, but anyone can become “sensitized” from pregnancy, blood transfusions, dialysis or, like Louisiana’s Hall, a previous transplant.

Kidney paired donation evolved as an alternative for people with incompatible donors, especially those super hard-to-match.

The UNOS project aims to spur more of them. Any of the 77 transplant centers participating so far merely submits key matching information about a patient and his or her would-be donor to UNOS’ database, which periodically alerts centers to potential matches with people from other parts of the country.

The first attempt late last month — when the database contained just 43 kidney patients and 45 donors — turned up seven potentially matching pairs, says Dr. Kenneth Andreoni of Ohio State University, UNOS’ kidney committee chairman. The rest is up to the home hospitals of the patients and donors, who ship each other blood samples necessary for final compatibility testing and then set up the operations.

Transplant specialists are divided on whether the UNOS approach will prove best, or whether regional alliances or developing “centers of excellence” for kidney swaps might be more effective. In San Antonio, Bingaman notes that a third of his hospital’s 180 live-donor kidney transplants this year were part of exchanges. That’s a big increase from 71 live-donor transplants in 2007, before he began swaps.

That debate aside, people can stay on their home hospital’s transplant list and be part of the pilot national database, potentially increasing their chances of finding of a match, says Hopkins’ Segev.