By RICK STEELHAMMER The Charleston Gazette 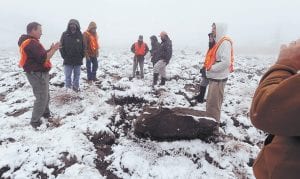 This photo shows Scott Eggerud, left, a forester with the Office of Surface Mining’s Appalachian Regional Reforestation Initiative, explain the ripping process during a demonstration of the work at the Barton Bench Ecological Restoration Site in Cheat Bridge W.Va. A 90-acre section of the old mine site has been designated the Barton Bench Ecological Restoration Site where the U.S. Forest Service is conducting an experiment in reforesting grassland-reclaimed surface mine sites. (AP Photo/The Charleston Gazette/Lawrence Pierce)

Except for its elevation — high enough to produce snow two weeks ago — a reclaimed surface mine on the upper slopes of Cheat Mountain’s 4,429-foot Barton Knob is not much different from scores of other former mine sites scattered across West Virginia. “After this area was mined in the early 1980s, the coal company did what it was supposed to,” according to regulations and practices in effect at the time, said Shane Jones, an ecologist for the Monongahela National Forest. “It did a good job of keeping the soil on the ground by reclaiming this site to grassland.”

Its topsoil, though, was compacted by heavy machinery during the postmining re-shaping process. Then, it was seeded with grasses and other ground cover plants that kept native species at bay and produced little organic material to nourish the soil. It could take centuries for the former coal mine to become a part of the surrounding upland hardwood and red spruce forest.

“This land is stagnant,” said Jones. “It’s in what we call a state of arrested succession.” Without intervention, he said, “it could stay like this for hundreds of years.”

The former strip mine is located on land once owned by the Mower Lumber Co. It is part of a 40,000-acre tract of Mower land sold to the Monongahela National Forest in the mid-1980s.

While keeping the old mine site stable is a plus, keeping it stable while improving habitat for wildlife and gradually becoming reforested with native hardwoods and red spruce would be much better, according to a coalition of land management agencies hoping to further reclaim the site.

A 90-acre section of the old mine site has been designated the Barton Bench Ecological Restoration Site. Here, the U.S. Forest Service is conducting an experiment in reforesting grassland-reclaimed surface mine sites.

Hydraulic deep-ripping machines attached to bulldozers are being pulled through the compacted grasslands, cutting threefoot deep grooves in the soil to prepare the land for tree planting. On some portions of the land, perpendicular deep-ripping grooves will be made to create cross cuts. Other sections of the site will be left un-ripped, while still others will be subject to controlled burning. The idea is to determine which methods produce the best reforestation results.

Once the land is treated, the short-term goal is to create early succession wildlife habitat on the site, which will include plantings of native ground cover species compatible with such brushy native species as aspen and elderberry, and the hardwood and spruce trees that will succeed them.

Seeds for the grasses, brush and trees to be planted here have been collected from the vicinity of the mine site, and have been propagated at the Natural Resources Conservation Center’s Appalachian Plant Materials Center in Alderson.

“We want to put this land back on the track to natural succession,” Jones said. “Eventually — probably in 30 years or so — the land will succeed into the spruce-hardwood mix that was here before the mining took place.”

By returning the mine site to native forest, the state’s much diminished red spruce forest — the target of an ongoing restoration effort — will grow, and more high-value hardwood timber will be produced. The land’s ability to absorb and control water runoff will also be enhanced.

An army of volunteers is being recruited to take part in a massive tree planting effort planned for Barton Bench next spring.

If the 90-acre experiment at Barton Bench is a success, similar activity could take place on an additional 1,800 acres of reclaimed mine grasslands in the Monongahela National Forest’s Mower Tract.

“We’re trying to get the coal companies to reduce compaction and use native, tree-compatible ground cover when they reclaim their mines,” said Scott Eggerud, a forester with the Appalachian Regional Reforestation Initiative. “Then, they can plant native, Appalachian trees. They can save a lot of money on earthmoving costs by cutting back on compacting and reforesting,” he said, while improving the terrain’s water absorption capabilities and growing marketable timber.

“I think this idea in some form would work well on mountaintop removal jobs,” said Edwin Michael, professor emeritus of wildlife biology and ecology at WVU, who was among more than a dozen people attending an onsite presentation on the Barton Bench restoration project on Nov. 4.

“They need to be doing this kind of work as they go, when their heavy equipment’s still on site,” Michael said. “There wouldn’t be as much controversy if they were planting trees after they mined.”