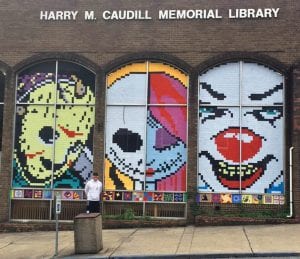 Tyler Watts teaches 4th and 5th grade math to students at Letcher Elementary School. For the past three years, he has also been creating Post-It Note art here and elsewhere in Kentucky, but nothing to the scale of his current work seen on three large windows at the Harry M. Caudill Public Library on Main Street.

“I began designing and creating art like this when I was teaching first grade about three years ago.” Watts told The Mountain Eagle. “We were studying line symmetric figures when I had the idea. I have created similar murals at slightly smaller scales all across the state for public schools and other businesses.”

He said his latest work is a tribute to his young daughter and a Disney movie she loves.

“Well, my daughter loves “The Nightmare Before Christmas”, so that part was for her. Her name is Lilah,” he said. “I wanted to use designs that represented Halloween and were kid friendly, yet at the same time, not too dark. I wanted it to be something that Halloween (and) scary movie fans of all ages could appreciate and connect to.” 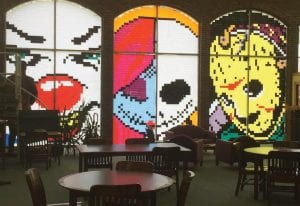 Pictured above is the view from inside the Harry M. Caudill Library in Whitesburg, showing the Halloween art display that Tyler Watts used 5,982 Post-It Notes to complete. The art is based on the film “The Nightmare Before Christmas.”

Post-It Notes were developed by the 3M Company in 1972, but the company didn’t start producing and selling them on a wide scale until 1979. From that time until the late 1990s, when 3M’s patent expired, the product was only manufactured at 3M’s plant in Cynthiana, Kentucky. That Harrison County plant is responsible for most the world’s production of the sticky notes.

Watts said it took him a week to post all of the sticky notes he used in three pieces of art, but required “much longer to fine tune the designs.”

He said he was able to turn the project into a lesson for his math classes.

“My students helped me fine tune the math on the project as we connected the real world project with area, perimeter, multiplication, and division, and most importantly, measurement,” he said “For example, determining how many packages of a certain color of notes to buy to satisfy the project was a question that we had to answer more than once. I wanted to give them a tad bit of ownership in the project without taking up very much class time. Sharing this project with them let them see me as a teacher both inside and outside of the classroom. It also tied what they were doing in the classroom to a real world connection.”