Promise leads to 40 years as Santa 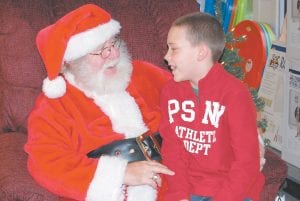 LEARNING WHO IS NAUGHTY AND WHO IS NICE — Santa Claus, portrayed by Steve Brewer, made nine-year-old Dakota Halcomb laugh Sunday evening at Frazier’s Farmer Supply in Whitesburg. Dakota, of UZ, asked Santa for a Nintendo 2DS. He is a third-grader at West Whitesburg Elementary School. (Photo by Sally Barto)

After keeping a promise he made 40 years ago, Steve Brewer is considering retiring his red suit, hat and boots.

When Brewer dressed up as Santa Claus for the first time at the age of 27, he didn’t realize that it would turn into such a long commitment. In 1973, Brewer’s friend, Raymond Holbrook of Neon, had been “Letcher County’s Santa” for many years but had fallen ill. Holbrook telephoned Brewer and told him to come by his house and pick up his Santa suit.

After portraying Santa for what he believed would be that one year only, Brewer had Holbrook’s suit dry-cleaned and tried to return it to him.

“Raymond said, ‘You don’t understand. I’m not Santa Claus any- more. You are,’” said Brewer.

Holbrook died before the next Christmas.

“He asked me to do these things — always play Santa Claus when you can, never turn anyone down and never charge a penny,” said Brewer.

In the early days of dressing up as the jolly old man, Brewer threw candy to children in different coal camps in Letcher County while seated atop a fire truck for two evenings. Then Brewer would spend one day during the week of Christmas at the old A&P Store in Neon to give children the opportunity to sit on Santa’s lap and tell him what they wanted for Christmas that year.

Playing Santa is no longer just something Brewer does for a few hours during the week of Christmas. Brewer, a McRoberts native and longtime Letcher County resident who now lives in Irvine in Estill County, estimated that he will spend about 200 hours including travel time this holiday to keep his promise to Holbrook.

“ Playing Santa Claus used to be the difference (between) a baseball and a basketball,” said Brewer. “It has grown so big.”

On Fridays in December, Brewer drives 127 miles from Irvine to Letcher County. After appearing at a packed schedule of events, Brewer travels home on Sunday nights.

After resting during the weekdays, Brewer packs his Santa gear on Fridays and heads to Letcher County again. The hectic schedule requires the support of his family.

“When it comes Christmastime, they know I won’t be there,” said Brewer. “You couldn’t do this if you didn’t have a supportive family.”

The majority of his December weekends consist of attending meet-and-greets at different businesses and private parties. Brewer often can be found in Whitesburg during the Christmas season at Frazier’s Farmer Supply, Parkway Pharmacy and Long John Silver’s.

This year, he has also dropped by the Martha Jane Potter and Letcher elementary schools as well as a high school in Harlan County and a school in St. Charles, Va. Brewer has also visited the Blackey Community Center and played Santa at a breakfast at Hemphill Community Center. Additionally, he has attended two private parties at Pine Mountain Grill and made special appearances at the homes of friends.

The 2013 Whitesburg Christmas Parade started a little late last Friday (Dec. 13) because Brewer stopped to have Santa’s picture made with children during his walk from East Main Street to the other end of town where Santa’s sleigh was parked.

Brewer is still scheduled for a meet-and-greet at ACE Hardware in Pikeville, to attend a party for foster children, and to show up at a drug court party in the Letcher Circuit courtroom.

“ I’ve learned there is good in all of us and parents no matter what will take time to take their kids to see Santa,” said Brewer.

The Dec. 23 courtroom appearance is his last gig for 2013 — and perhaps forever. Brewer will then head back to Estill County to be with his family. That’s when he’ll shave his beard and kick off his boots.

If Brewer could find someone willing to take over his job as Santa, he would gladly pass it on to someone else.

“ We need somebody young,” said Brewer. “I’m trying to make this my last year, but it is hard to find somebody to replace me.”

Brewer said two men have inquired about the assignment.

“One guy has no personality and one wants to get paid,” said Brewer, who takes pride in never being paid to portray Santa Claus.

“To see the eyes of children light up should be enough pay for a man to drive 500 miles,” he said.

“I’ve always stuck with it,” Brewer added. “A promise is a promise. It’s been a fun trip. I’ve tried to be as much of a real Santa as the guy was who asked me to be Santa.”

For the past 12 years, Brewer has started letting his white beard grow out in September.

“It’s more authentic and kids want to pull on it to see if it’s real,” he said.

When it comes to listening to what children want for Christmas, Brewer is patient and attentive.

“They get to talk to Santa as long as they want,” he said.

Parents and children never know what Brewer is going to say. This past Sunday evening at Frazier’s Farmer Supply, Brewer told one little girl that he spent 10 of his happiest years in the 5th grade before offering her some advice.

“Stay in school,” Brewer told the girl. “Get a good education. Don’t get on drugs. Be the best you can be.”

While reflecting on his recent appearances in the mountain region, Brewer estimated that about 60 percent of children in the Pennington Gap area of southwest Virginia live with people who aren’t their biological parents. He said that when he visits a school there it is common for children to ask Santa to get their parents off of drugs or to help get their parents out of jail.

“That breaks my heart,” he said.

Brewer lived in Dry Fork while working for about 22 years as an with the United Mine Workers of America. He and his wife moved to Estill County a few years ago to be closer to their daughter and grandchild.