Promising band from South will appear in Whitesburg Thursday 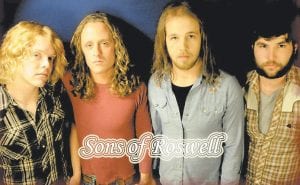 Sons of Roswell, which formed in Muscle Shoals, Alabama in 2005, will appear in Summit City.

Sons of Roswell, one of the South’s most promising new rock bands, will perform in Whitesburg Thursday night at Summit City. The show will begin at 9 p.m. Admission is $5.

Since forming in the summer of 2005 in the musical hotbed of Muscle Shoals, Alabama, Sons of Roswell has been on a rocket ride to regional and national acclaim. The now five-piece band steadily toured the eastern U.S., and released its self titled debut album in March 2007 to rave reviews. The group has received praise for being an act with a familiar sound, yet not sounding exactly like your run of the mill rock n’ roll band.

After appearing last summer at the Bonnaroo festival in Tennessee and later sharing stages with the Avett Brothers and Jason Isbell and the 400 Unit, the band spent much of end of 2008 working on its second studio album, which is expected to be released soon. A portion of the new album is being produced by Isbell.

In a recent interview with the Flor-Ala, a student newspaper at the University of North Alabama, band leaders Burgess and Kevin Kreenum said their music is heavily influenced by old and new artists including The Rolling Stones, Led Zeppelin, The Band, Bob Dylan, The Who, Ryan Adams and The Strokes.

The musical influence of Nashville rock stars Kings of Leon can also be heard on two songs from the upcoming album, “Soft Hands” and “Through the Noise,” now available on MySpace (www.myspace.com/ sonsofroswell).

Wrote the Tennessean, “Seventies rock, particularly of the ‘Southern’ variety, has been a popular mining source for young rock bands in recent years, but most seem solely drawn to that period’s arena rock bombast and shallow riffs, ignoring the fact that delicate, contemplative material was masterfully yarned by groups like The Band in the same era. Muscle Shoals’ Sons of Roswell seem drawn to both sides of the coin, indulging in tough bar-rock stomps, but staying just as gritty when they dial back their amps for the shuffling country-rocker ‘Losing My Mind,'” a song which appears on the debut album and on MySpace.

Writing in Performer magazine, reviewer David Feltman his this to say about Sons of Roswell’s debut album: “Vocalist Kevin Keenum and company present an even mix of bluesy hard rock and punk rock attitude served with a distinctly southern flavor. As a result, the boys of Roswell have created an album packed with strutting, cocksure, optimistic tracks that provide a refreshing alternative to the whiny, jaded music that predominately populates the pop music charts.

“The real magic of this album lies in the song craft. Sons of Roswell demonstrate a real knack for writing catchy hooks, energetic bridges and simple yet blazing guitar solos that continually revitalize the songs before they can wear out their welcome. It’s difficult not to become too derivative when plumbing the depths of a classical southern/hard rock musical heritage like Sons of Roswell’s, but they’ve managed to produce an album that not only holds up to repeat listenings, it demands them.”

There will be no opening act at Thursday night’s show. The band will move on to Knoxville, Tenn., on Friday for a date at Barley’s Taproom.