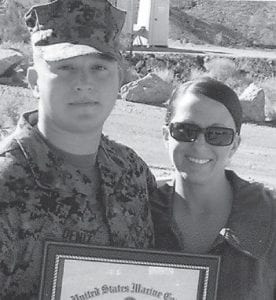 Paul A. Deniz Jr. was promoted to gunnery sergeant (E-7) in the U.S. Marine Corps on Jan. 1. He is an air traffic control detachment quality assurance representative, and has been in the Marine Corps for almost 12 years. He has deployed twice, both in support of Operation Iraqi Freedom. On the second deployment, he was aboard the USS Iwo Jima with the 24th Marine Expeditionary Unit assisting in the evacuation of American citizens from Lebanon. He is pictured with his wife, Jennifer Deniz, daughter of Ray and Angie Jensen of Payne Gap, who is a staff sergeant in the Marines. The couple have a three-year-old daughter, Haley.