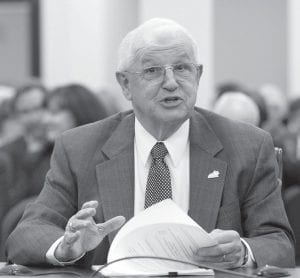 A Kentucky House committee approved a proposed $17.5 billion two-year state budget Tuesday night that includes cuts to higher education and seeks to trim the prison population by increasing use of parole for some nonviolent criminals to squeeze savings.

The spending blueprint proposes about $1.3 billion in general fund bonding for construction projects aimed at creating thousands of jobs at a time of stubbornly high unemployment.

It also would cut two instructional days for public elementary and secondary schools — an expected move projected to yield about $36 million in savings each year. School districts could preserve the days but would pick up the tab.

State employees would go without pay raises, and the plan would revise state health insurance off erings at a projected savings of $150 million in the two years.

Public universities and colleges would take a 1-1/2 percent spending cut in the first year and a 1 percent reduction in the second year. Adult education would also be cut.

Theplan maintains state support for the basic funding formula for elementary and secondary schools, minus the two days that would be dropped from school calendars.

The proposal cleared the House Appropriations and Revenue Committee on a 19-5 vote, setting up a vote by the full House that could occur as soon as Wednesday. Once it clears the Democrat-led House, the Republican-controlled Senate will put its imprint on the spending plan.

Rep. Harry Moberly, a former longtime House budget committee chairman, summed up the spending proposal as one that inflicts pain but “continues progress in Kentucky.”

The proposal would add to the state’s bonded debt to fund school construction along with sewer and water projects in an attempt to put more Kentuckians back to work. Many of the state’s oldest schools would be replaced under the proposal.

The committee also approved $412 million in highway bonds funded by the road fund, and $485 million in bonds for projects funded with revenues of state agencies and universities.

Rep. Jim Wayne, who voted against the bill, said it contains “historically high” levels of debt that he called “just appalling.”

Rep. Jesse Crenshaw, D-Lexington, said the plan calls for increased use of parole for certain nonviolent off enders, with a goal of decreasing the state’s prison population by 1,000 between July 2010 and a year later. He projected the savings at $15 million.

The measure calls for use of home incarceration as among the alternatives, and says that parole revocation should be a “last resort” for parolees committing technical violations but no new felonies, he said.

The spending plan includes an extra funding for adult and family protection services, much of which would go to improving safety for social workers.

The goal is to improve communication links with social workers when making house calls and to bolster security at their offices.

“We would hope that that goes a long way in providing a feeling of security that folks out there need,” said Rep. Jimmie Lee, DElizabethtown.

Social workers have called on Kentucky lawmakers to fully fund the “Boni Bill,” which passed in 2007. That measure came after the murder of social worker Boni Frederick during a welfare check in 2006.

The spending plan includes increased funding for Kentucky Educational Television, the Governor’s Scholars Program and the schools for the blind and deaf.

In another budget-balancing move, the proposal would take an anticipated $40 million in excess funds from the basic school funding formula and put it in the general fund.

The spending proposal assumes another round of federal stimulus funding for Medicaid, the state-federal health insurance program that covers about 790,000 low-income and disabled Kentuckians. The higher federal Medicaid match currently lasts only until the end of the year, unless Congress approves a new round of support.

Without a six-month extension through June 2011, the state faces a $256 million hole in the Medicaid budget, Lee said. But he expressed confidence the extension will be forthcoming.

“The hole is large enough that it looks like the black hole in space,” he said.

Medicaid rolls have risen sharply amid the steep economic downturn.

The House spending plan relies on a companion revenue bill that’s aimed at generating more than $300 million in additional revenue in the coming two years to help balance the next budget, which takes effect July 1.

The proposed tax changes drawing the most attention would temporarily suspend tax write-offs for businesses reporting losses and accelerate the collection of sales taxes.

Lawmakers faced a more than $1 billion shortfall when crafting the spending plan.

A Senate committee began its review Tuesday of the revenue bill.