Proposed budget would be ‘harmful to my district,’ Rep. Hal Rogers says 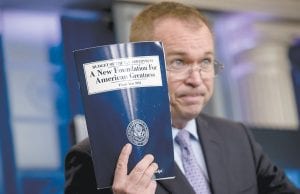 President Donald Trump sent Congress his recommended budget for the coming fiscal year. It includes steep cuts to many programs relied on by the poor, such as Medicaid and food stamps, and greater spending on the military.

Here’s a look at the budget by the numbers:

$4.1 trillion — Total proposed spending by the federal government for next year

$3.6 trillion — The spending cuts over the decade that the White House says would bring about a balanced budget.

$610 billion — How much the president proposes to save over the coming decade in Medicaid, the program that pays the health care and nursing home bills for millions of low-income Americans.

$191 billion — How much the president proposes to save over the coming decade on food stamps.

$2.6 billion — The amount for border security, includes $1.6 billion to “plan, design, and construct a physical wall along the southern border.”

56,400 — The number of soldiers, sailors and airmen that would be added to the Defense Department’s ranks above that planned by the Obama administration.

6 — The number of weeks of paid leave for new mothers and fathers under a proposed program to help new parents “bond with a new child without worrying about paying their bills.”

“President Trump proposed an aggressive budget to beef up our national defense, while also working to balance federal spending over the long run. It includes important funding for priorities like immigration enforcement and combatting the nation’s opioid epidemic, while also preserving Social Security and Medicare benefits for our most vulnerable. However, the proposed cuts to some federal programs are not mere shavings; they are rather deep and harmful to my district spanning Kentucky’s Appalachian region and other rural, impoverished parts of the country. The Congress has a Constitutional duty to fund the federal government and protect taxpayer spending, and we will uphold that responsibility through the appropriations process for fiscal year 2018. We will responsibly consider the impact of every component of President Trump’s blueprint. However, we must ensure that we take care of the less fortunate and protect federal programs, like the Appalachian Regional Commission, that provide vital resources for rural communities and families every year.”