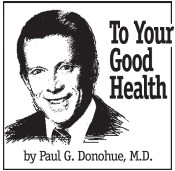 DEAR DR. DONOHUE: I had my annual PSA test, and it came back 3.5 ng/ml. My doctor said anything below 4 is good.

My past scores have never exceeded 0.5. I am concerned with the rate of increase from last year. Need I be? Should I get checked in six months to ease my mind? — B.B.

ANSWER: PSA (prostatespecifi c antigen) is a blood test used for the detection of prostate cancer. It’s far from being a perfect test, but it is the only one we have. Not only is the test imperfect, but experts disagree on how the test numbers should be interpreted.

Many insist that a man’s age should define what the normal range for it is. The younger the man, the lower should be the acceptable PSA.

Results from large studies yield conflicting information. One study suggests that a PSA of 2.5 ng/ml ought to prompt additional testing, such as a prostate biopsy. Another large study uses 4 as the cutoff for ordering more investigation. And a third sets the upper limit of normal at 3.5.

PSA velocity is another factor that enters into interpreting the test. If the PSA value increases in one year by 0.75 or more, then the possibility of cancer exists and further testing is suggested — a biopsy. Your value increased many times that number. I believe you need to have that checked out soon. In fact, if a man has a PSA value of less than 4 on previous tests, and his PSA has increased by 0.35 in one year, that man should be advised to have a biopsy.

The booklet on prostate enlargement and prostate cancer digs more deeply into these subjects. Readers can obtain a copy by writing: Dr. Donohue — No. 1001W, Box 536475, Orlando, FL 32853-6475. Enclose a check or money order (no cash) for $4.75 with the recipient’s printed name and address. Please allow four weeks for delivery.

DEAR DR. DONOHUE: My son had surgery for diverticulitis and was discharged from the hospital two days later. He had to return to the hospital because of terrible stomach pain. The doctor did a second surgery and submitted material to the lab. The report came back that he had C. diff. I would appreciate so much any information on this. — M.M.

ANSWER: C. difficile (diff-uh-SEAL) is a bacterium. It can be acquired anywhere, but most often in the hospital. In the digestive tract, it is a distinct minority. However, antibiotics can kill off the normal bacteria in the tract and the C. difficile bacterium then experiences explosive growth. That can cause minor intestinal problems to major intestinal catastrophes with voluminous diarrhea and fierce pain. All of this is due to toxins (poisons) produced by this germ.

Stopping antibiotics is the first line of treatment. If that doesn’t bring relief, then the antibiotic metronidazole often cures patients. Should metronidazole fail, the antibiotic vancomycin is a trusted standby. Sometimes attempts to reestablish a normal bacterial population for the colon are successful in ending the problem.