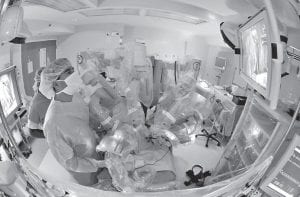 An internal video of a patient’s body is seen during prostate cancer surgery. No major medical group recommends routine PSA (prostate-specific antigen) blood tests to check men for prostate cancer, and now a government panel is saying they do more harm than good and healthy men should no longer receive the tests as part of routine cancer screening. (AP Photo/University of Chicago Medical Center)

Men finally may be getting a clearer message about undergoing PSA screening for prostate cancer: Don’t do it. ey

Th may not listen. After all, the vast majority of men over 50 already get tested.

The idea that finding cancer early can harm instead of help is a hard one to understand. But it’s at the heart of a government panel’s draft recommendation that those PSA blood tests should no longer be part of routine screening for healthy men.

The U.S. Preventive Services Task Force examined all the evidence and found little if any reduction in deaths from routine PSA screening. But it did conclude that too many men are diagnosed with tumors that never would have killed them and suffer serious side effects from resulting treatment.

That recommendation isn’t final — it’s a draft open for public comment. But it goes a step further than several major cancer groups including the American Cancer Society, which urges that men be told the pros and cons and decide for themselves.

The new advice is sure to be hugely controversial. Already some doctors are rejecting it.

“We all agree that we’ve got to do a better job of figuring out who would benefit from PSA screening. But a blanket statement of just doing away with it altogether … seems over-aggressive and irresponsible,” said Dr. Scott Eggener, a prostate cancer specialist at the University of Chicago.

In the exam room, explaining the flaws in PSA testing has long been hard.

“ Men have been confused about this for a very long time, not just men patients but men doctors,” said Dr. Yul Ejnes, a Cranston, R.I., internal medicine specialist who chairs the American College of Physicians’ board of regents.

He turned down his own physician’s offer of a PSA test after personally reviewing the research.

That’s an emotional shift, as the American Cancer Society’s Dr. Len Lichtenfeld voiced on his blog.

“We have invested over 20 years of belief that PSA testing works. … And here we are all of these years later, and we don’t know for sure,” Lichtenfeld wrote. “We have been poked and probed, we have been operated on by doctors and robots, we have been radiated with fancy machines, we have spent literally billions of dollars. And what do we have? A mess of false hope?”

Too much PSA, or prostate specific antigen, in the blood only sometimes signals prostate cancer is brewing. It also can mean a benign enlarged prostate or an infection. In fact, most men who undergo a biopsy for an abnormal PSA test don’t turn out to have prostate cancer.

Screening often detects small tumors that will prove too slow- growing to be deadly — by one estimate, in 2 of every 5 men whose cancer is caught through a PSA test. But there’s no way to tell in advance who needs treatment.

“ If we had a test that could distinguish between a cancer that was going to be aggressive and a cancer that was not, that would be fabulous,” said Dr. Virginia Moyer of the Baylor College of Medicine, who chairs the task force, an independent expert group that reviews medical evidence for the government.

Why not screen in case there’s a mortality benefit that studies have yet to tease out? The task force outlined the problem with that:

— Up to 5 in every 1,000 men die within a month of prostate cancer surgery, and between 10 and 70 more suffer complications.

— At least 200 to 300 of every 1,000 men treated with surgery or radiation suffer incontinence or impotence.

— Overall, Moyer said 30 percent of men who are treated for PSA-discovered prostate cancer suffer signifi cant side effects from the resulting treatment.

Among the questions sure to be raised during the public comment period are how doctors should advise men with prostate cancer in the family or black men, who are at increased risk.

PSA testing also is used to examine men with prostate symptoms, and to check men who already have had prostate cancer. The new recommendation doesn’t affect those uses.

Congress requires that Medicare cover PSA tests, at a cost of $41 million in 2009. Other insurers follow Medicare’s lead, especially in light of conflicting recommendations.

Nor does the new recommendation mean that men who want a PSA test can’t have one. If the rule is adopted it would just advise against doctors pushing it.

“The truth is that like so many things in medicine, there’s no one-size- fitsall,” said Dr. Michael Barry of Massachusetts General Hospital.