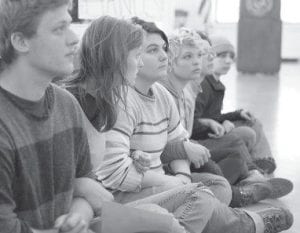 A handful of environmental activists were arrested Monday outside the offices of West Virginia Gov. Joe Manchin, following an afternoon-long sit-in to protest plans by Massey Energy Co. to blast on Coal River Mountain.

The seven were among a group of several dozen who converged on the governor’s Capitol reception room shortly after noon to urge the second-term Democrat to intervene. The seven were arrested when the office closed at 5 p.m. and they refused to leave.

Massey, based in Richmond, Va., has permits to mine at Coal River Mountain, which Climate Ground Zero, Coal River Mountain Watch and other environmental groups want to see preserved for development of a windmill farm. They say Massey should mine underground instead of blasting the mountaintop, but Massey has said that’s not feasible.

The protesters delivered a letter asking Manchin to act and stop mountaintop removal mining. He met briefly with the group, listening and taking questions. But he said they were wrong to believe he can unilaterally yank the permits in question.

He also told them to call his office when they believe they are being intimidated by coal companies or “when you don’t think you’re getting answers.”

Southern West Virginia resident Chuck Nelson, one of the protesters, reminded Manchin that he had been handed a packet of information touting the wind farm proposal at a recent Braxton County summit, but that nothing apparently came of it. Another participant expressed frustration with the process that the governor urged them to take part in and abide by.

Eventually, seven protesters sat on the floor, holding signs and vowing not to leave until Manchin acted or they were removed. When arrested, they were charged with trespassing and could also face an additional misdemeanor, obstructing an officer, said Jay Smithers, director of the Capitol’s Division of Protective Services.

The letter, signed by 13 residents, asks Manchin to declare a state of emergency and stop coal mine blasting they fear could threaten the massive Brushy Fork sludge dam. Citing an emergency evacuation plan, they argue that failure of the dam would create a wall of water 50 feet high, potentially striking Whitesville and kill- ing as many as 998 people.

Mountaintop removal is a form of strip mining that involves blasting apart ridge tops to expose multiple seams of coal, dumping debris into valleys and flattening what had been peaks.

Massey and other coal companies say it’s the only way to reach some reserves. They argue they reclaim the land so it can be developed for commercial or other uses. Critics say the land is ruined forever, and that people and property suffer from the dust and vibrations that accompany blasting.

Climate Ground Zero says it has staged 16 actions so far this year as part of an ongoing campaign of civil disobedience that has resulted in more than 100 arrests.