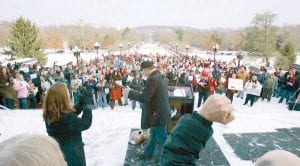 HUNDREDS ATTEND PROTEST IN FRANKFORT – Demonstrators rallied against mountaintop removal coal mining on the Capitol steps in Frankfort on Feb. 14. The protesters urged lawmakers to pass a bill that could curb what they say is a devastating form of coal mining that obliterates mountaintops. (AP Photo/Ed Reinke)

Hundreds of protesters, including many from Letcher County, traveled to Frankfort last week to ask lawmakers to pass a bill that could curb what critics say is a devastating form of coal mining.

People from across the state descended on the Capitol on Valentine’s Day, singing songs and making speeches against mountaintop removal coal mining while urging lawmakers to pass legislation that would significantly slow the process.

“We’ve traveled to come here to make a statement. The statement has got to be that the forces of greed are destroying God’s garden,” the Rev. John Rausch, a Catholic priest from Stanton, shouted at the rally. “Mountaintop removal is an assault on creation.”

Mountaintop removal mining is a process in which peaks are leveled with explosives and heavy machinery to extract the coal. Opponents to the procedure say it damages the environment and leads to polluted streams and drinking water.

A proposal in the Kentucky General Assembly by state Rep. Don Pasley, D-Winchester, would prevent companies from dumping excess dirt and rocks into valleys below. Similar legislation has been proposed in the General Assembly before, but has not gained traction.

Supporters of the bill, however, are hoping that this year could be different.

Pamela Maggard, a middle school teacher from Knott County in eastern Kentucky, said she thought it was “illogical” that the debate was still raging. Maggard said she’s concerned that mountaintop removal mining has tainted her family’s water supply and wants coal companies to change their current methods.

“I know mining is not going away, and I don’t want it to,” Maggard said. “(But) I want them to mine responsibly.”

Kentucky Coal Association President Bill Caylor opposes the legislation and believes it unfairly singles out the coal industry. Caylor said the measure would affect not just surface mining, but underground mines by restricting them from disposing of excess dirt and rocks.

But Caylor said mountaintop removal also has some value in providing flat land for people living in the mountains that can be used for farming and tourism.

“We cannot mine without having the ability to place our excess mine and dirt in fill areas,” Caylor said. “And this will have a very significant impact on our ability to mine coal – particularly surface mining but underground mines as well.”

Raul Urias, a 29-year-old former coal miner, said he was also concerned about the effects such mining has had on his drinking water. Urias said he came out because he wants to make conditions better for his young daughter.

“It affects me pretty good,” Urias said. “I’m a pretty rational person, but it gets me.”

The legislation, House Bill 164, is pending in the House Natural Resources and Environment Committee.