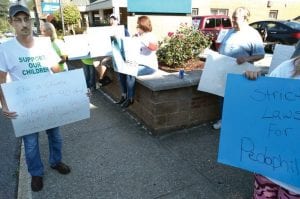 Residents of Camp Branch protested in front of the courthouse on Tuesday after a man accused of sexual abuse of a minor was undercharged for the crime, pleaded guilty and received only a 90-day sentence, the maximum for the misdemeanor with which he was charged. The county attorney is now seeking to set aside the guilty plea and revise the charge to a felony. (Photo by Sam Adams)