Protesters, including the half that didn’t vote, should stop it 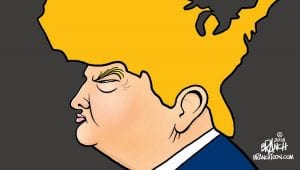 No one is more supportive of young people involved in politics than I am. Year after year, I not only teach my own students but also speak at colleges and universities, eschewing political correctness but urging, begging even, for the students to passionately advocate the beliefs they hold and to become active participants in our democracy.

But not by protesting our democracy. Not by challenging the Constitution.

Imagine, just for a minute, if the shoe were on the other foot here, and Hillary Clinton had managed to squeak by with a few extra votes in Michigan and Wisconsin, and Donald Trump supporters were out there protesting the clear results of the Electoral College.

What would we be saying? What were most of us, faithful supporters of the Constitution that we are, saying just a few weeks ago? We were foaming at the mouth, that’s what we were doing — at Donald Trump’s comment, made in his usual mocking tone, that he might not accept the results of the election. It was Clinton’s finest moment. She stopped short (but not by much) of calling him a traitor to the Constitution.

What does it make those young people in Portland?

The saddest statistic: Reportedly, more than half of those arrested at the protests in Portland didn’t vote. What are they protesting? Their own laziness and indifference, and the laziness and indifference of so much of their generation? To elect Clinton, all they had to do was vote in greater numbers than older people tend to. And they might be wise to do that, since they have a longer future ahead of them, with no Social Security and Medicare to look for (once they’re done being crushed by student-loan debts). But no one cares. Because they prefer to get their sun protesting rather than getting the benefits they need by voting.

I’d like to mention two recent moments from “Saturday Night Live” (which is quickly becoming a text, of sorts, on modern news media). First, the host from two weeks ago, the famous and longmissed Dave Chappelle, was, not surprisingly, brilliant. But what was surprising was his close: With a serious expression, looking straight into the camera, he said, “I’m wishing Donald Trump luck, and I’m going to give him a chance, and we, the historically disenfranchised, demand that he give us one, too. Thank you very much.” Do you hear that, protestors? That is truth speaking to power.

The other great “SNL” moment was the cold open to that show, with Kate McKinnon in the Hillary role she’s played throughout 2016. In character, at the piano, she beautifully sang the most mournful rendition of Leonard Cohen’s “Hallelujah” I have ever heard. She ended by saying simply, “I’m not giving up, and neither should you.”

Do we really need more than that?

I have been rooting for Hillary Clinton for 10 years. I knew so many wonderful people in that campaign, many of them people who worked with me in Democratic campaigns over the past three decades. For many, this was to be their last hurrah, the last chance for the baby-boom generation to leave our children a better world. For many women my age, especially the “Wellesley Connection” of women who shared our alma mater with Clinton, it feels like we all lost. That is cause for sadness and regret, for introspection and reflection, for learning lessons and changing tactics. Not for giving up.

When you lose, you have to work harder to avoid losing more. You can work different — work locally, elect a mayor, take over the state legislature or the school board, even run yourself.

We had an election. It was not rigged. A peaceful transition is a hallmark of a stable democracy.

We should give the new president a chance. He won.

And we — those of us who have a different vision of America and the world and each other — should keep on fighting for what we believe in.