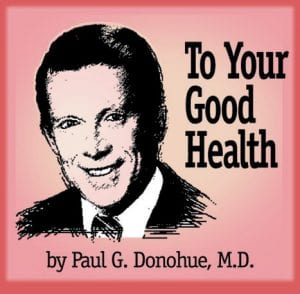 DEAR DR. DONOHUE: Your article on arthritis was very interesting, but you did not explain about the arthritis that comes with psoriasis. I have it, and I know of two other people who have it. We don’t understand it at all. Please explain. — B.E.

ANSWER: Autoimmunity is the explanation for many illnesses, including both skin and joint psoriasis. “Autoimmunity” indicates that the immune system — our protection against germ invasion and other harmful attacks — for reasons not yet understood, turns against our own bodies; in this case, it’s the skin and joints. The immune system targets joints in as many as 7 percent of those who suffer from skin psoriasis. That’s a considerable number of people when you consider that as many as 3 percent of the entire population suffers from skin psoriasis.

Skin psoriasis precedes joint psoriasis most of the time, but there are instances when both occur simultaneously or when joint involvement appears before any skin manifestations.

The fact that skin and joint psoriasis run in some families also points to a gene influence on these conditions.

Any joint can be affected. The topmost finger joint, the one below the fingernail, is frequently targeted. Back, neck, knees, you name it — psoriasis can strike it. Like all arthritic joints, psoriatic arthritic joints are swollen, red, tender and stiff. The severity of joint involvement doesn’t always mirror skin involvement, but it does correspond to nail changes. Nails have small pits, become loosened from their attachment to underlying skin, often turn yellow and crumble.

Treatment of psoriatic arthritis depends on how bad the arthritis is. For mild to moderate cases, NSAIDS do a good job. They include the familiar Aleve, Advil, Motrin and many others. For more severe involvement, doctors prescribe drugs like methotrexate. And for severe arthritis, a breakthrough has come with the introduction of drugs like Enbrel, Remicade and Humira.

DEAR DR. DONOHUE: Public speaking panics me. My job requires that I do lots of public speaking. In spite of the fact that I am called on to perform often, it doesn’t get any easier for me. In fact, I think it’s gotten worse.

My sister has a similar problem. Her doctor gave her a medicine that makes her actually relish getting up and addressing a crowd. Do you know the name of the drug? — S.S.

ANSWER: I’m pretty sure it’s Inderal (propranolol). It has many medical uses, like regulating the heartbeat, controlling blood pressure and abolishing certain tremors.

It also controls the signs of stage fright. Many professional musicians have to use it before their performances. It’s a prescription drug, so your doctor has to agree to its use. Limit taking it to those occasions when you have to speak in public. It’s not habit-forming. It’s not a narcotic. It’s not a tranquilizer.