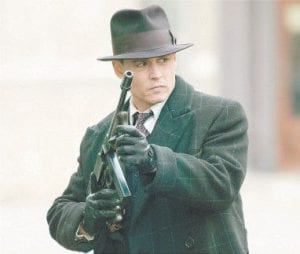 With “Public Enemies,” all the pieces would seem to be in place for an epic gangster drama: director Michael Mann, who has an affinity for complicated criminals; stars Johnny Depp and Christian Bale, who are famous for immersing themselves in their roles; and a thrilling true story of brazen bank robbers on the run.

Trouble is, “Public Enemies” feels rather stagnant. It looks terrific with its period details and costumes, rich production values and striking high-definition cinematography from frequent Mann collaborator Dante Spinotti. Crisp, blue Midwestern skies pop off the screen and nighttime chases and shootouts have an eerie theatricality about them. But until the final third, the film maintains a lowkey, steady pace when it should be percolating with unbearable suspense.

It makes you wonder why Mann would hold back. Dramatic restraint is certainly preferable to a gratuitous onslaught, but “Public Enemies” often borders on boring.

Mann follows the string of bank robberies John Dillinger (Depp) and his crew pulled off between his well-orchestrated escape from an Indiana prison in 1933 and his death at the hands of federal agents on the crowded streets of Chicago 14 months later.

The director of “Heat” and “The Insider” has said he was fascinated by Dillinger not just as a daring criminal but as the hero he became for regular people, folks who blamed the banks for their financial troubles during the Depression. Dillinger robbed those very institutions, which felt to them like an act of vigilante justice.

But nowhere in “Public Enemies” will you find that sentiment explored or even hinted at in a cursory way. Dillinger is famous here, of course — he’s Public Enemy No. 1, hence the title — but there’s little sense of his public perception, not much context for his notoriety. Mann also doesn’t really depict the poverty or desperation of the time; Dillinger usually spends time in cars, banks and glamorous haunts with slick cohorts. He’s more like a charming guy committing questionable acts.

Mann romanticizes him, rather than presenting a complete picture including whatever wildness or darkness might have existed inside him and driven him. (He cowrote the script with Ronan Bennett and Ann Biderman, based on journalist Bryan Burrough’s book.)

In Depp’s hands, Dillinger comes off as sexy and dangerous — the disarmingly straightforward way he sweeps coat-check girl Billie Frechette (Marion Cotillard) off her feet and persuades her to be his girlfriend is pretty irresistible. (With her expressive features and delicate frame, Cotillard looks just right for the time.) And the director shoots Depp in close-ups that accentuate the actor’s handsome features — those warm, brown eyes, sharp cheekbones and soft lips — and verge on idolatry.

Bale also gets this kind of affectionate treatment as Melvin Purvis, the rising FBI agent charged with bringing Dillinger down (Billy Crudup has some amusing moments as J. Edgar Hoover, Purvis’ boss, who comes across as self-serious and slightly buffoonish.) Purvis is stoic, principled and determined but not exactly humanized; neither are the members of his posse, who are essentially interchangeable with the exception of Stephen Lang as a veteran lawman who’s subtly powerful in the film’s final scene.

That moment alone makes you wish the whole movie had been as compelling.

“Public Enemies,” a Universal Pictures release, is rated R for gangster violence and some language. Running time: 130 minutes. Two and a half stars out of four.