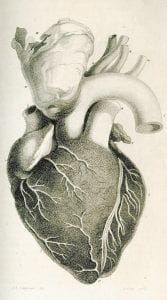 This illustration showing a diagram of a human heart appeared in an 1812 issue of the journal.

Unhappy with today’s health care? Think of what it was like to be sick 200 years ago.

No stethoscopes, antibiotics, X-rays or vaccines. Bloodletting was a common treatment. If you had a heart attack or a stroke, doctors put you in bed and hoped for the best. If you needed surgery, you got a few shots of whiskey and a bullet to bite.

Into this medical dark age, two Boston doctors brought a beacon of light. They started what is now the New England Journal of Medicine with the idea that science should guide care — not whoever argued loudest or had the most persuasive theory.

The first 100 copies in January 1812 were delivered by horseback. Today, 2 million people read the journal online every month. It is the oldest continuously publishing medical journal in the world, and it has touched lives in more ways than you may know. Some examples:

— Stroke victims now get clot-busting medicine, not dark rooms to ride out their brain trauma, because a 1995 study in the journal proved its benefit.

— Heart attack patients have arteries unclogged without surgery, then go home on medicines that studies in the journal showed could prevent future attacks.

— Women with early stage breast cancer can have just the lump removed followed by radiation instead of losing the whole breast, thanks to a 1985 study that found the lesser surgery just as good.

— Bone marrow and organ transplants — radical ideas when first tried half a century ago — are now routine. Even face transplants are becoming more common: three were described in last week’s issue.

— Rehydration is now recognized as the main treatment for many diarrheal diseases. A journal article warned against bloodletting in 1832 as cholera ravaged New York City.

— People no longer suffer surgery without anesthesia, a field that grew from Henry Jacob Bigelow’s 1846 report on the first successful use of inhaled ether.

— Medicine is more ethical, and study participants have more protections, because of a 1966 report in the journal about researchers failing to get informed consent. Another top journal had rejected the article as too controversial.

The New England Journal started decades before the American Medical Association was founded in 1847 and is widely credited with promoting evidencebased care.

“It has been very good for society,” said Pat Thibodeau, head librarian and associate dean for the Medical Center Library at Duke University. “When I go in, I’m hoping my doctor has read the New England Journal of Medicine or something similar and is following that information.”

“ They get the best research submitted to them, and they do an extremely good job of peer reviewing” to make sure it is solid, he said.

That’s what Boston surgeon John Collins Warren and James Jackson, who helped found Massachusetts General Hospital, hoped for the journal, which is now published weekly. It got its current name in 1928, seven years after it was bought by the Massachusetts Medical Society.

Warren’s father, John Warren, surgeon to George Washington’s troops, wrote the first article, on chest pain. Doctors had been debating whether it was caused by plaque — “the cement that builds up in arteries” — or blood clots, said Dr. Jeffrey Drazen, the journal’s editor- in- chief since 2000. Both proved correct — the “cement” fractures and allows a clot to form that blocks an artery, he said.

Heart care has been a journal specialty, and two prominent doctors — Elizabeth Nabel and Eugene Braunwald of Brigham and Women’s Hospital — trace its evolution in this week’s issue. Nabel is former director of the National Heart, Lung and Blood Institute and now is president of the Boston hospital.

They describe the first human cardiac catheterization — now a common diagnostic procedure — that Werner Forssman performed on himself in 1929. Under local anesthesia, he put a catheter into his arm and maneuvered it into his own heart.

For a heart attack, “it used to be that all we did was put people to bed for five weeks,” but studies in the journal showed “that that was the worst thing you could do,” said Dr. Jerome Kassirer, its top editor from 1991 to 1999.

The journal also helped prove “germ theory” and the nature of infectious diseases.

“People didn’t realize you could infect people when you were using your dirty gloves or not using gloves. People didn’t realize tuberculosis was communicable. They thought it emanated from clouds they called miasma, clouds of dirty smoke in cities,” said Lerner, the Columbia historian.

Not all was grand in the journal’s history, though, as Allan Brandt, a Harvard University medical historian writes in last week’s issue.

When Harvard Medical School debated admitting female students in 1878, the journal expressed concern about men and women mingling during surgeries normally witnessed only by one sex. The school didn’t admit women until 1945, when World War II caused a shortage of men.

The journal also agreed with mandatory sterilization of “mental defectives” in the early 20th century. “Most alarming,” Brandt writes, was its declaration in 1934 that “Germany is perhaps the most progressive nation in restricting fecundity among its unfit.” The journal later condemned Nazi medicine.

In recent years, it has tracked health policy, from the Clinton health care plan and the advent of managed care to current debates about Medicare.

There were oddball reports along the way, like the 2007 account of a cat named Oscar that had a knack for predicting when patients at a Providence, R.I., nursing home were close to death by curling up to them in their final hours.

The journal has printed few studies on alternative medicine because so little good research has been done on it, Drazen said. Unlike some other journals that like controversial research, the New England Journal tries to avoid it.

“People think the cutting edge is sharp. The cutting edge is very dull. It’s very foggy and you don’t know what the right answer is,” so editors try to pick studies that are definitive enough to affect care, Drazen said.

That’s why it publishes very few observational studies, the kind that in the 1990s led to pronouncements like “margarine is better than butter” only to be reversed by the next such study.

“Some of those are papers that we’ve seen and turned back,” Drazen said. “I’m looking for a higher evidence standard.”