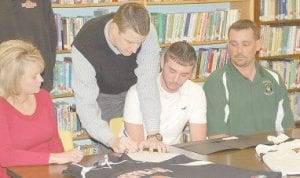 “He’s gonna be a great asset to us as a combo guard,” said Pikeville head coach Kelly Wells. “He shoots the ball really well and I’m a coach that likes guys that can shoot, and he certainly can do that.”

Puckett averaged 17 points, five rebounds and three steals a game for the Cavaliers and Coach Brian Johnson, a member of the Pikeville College Athletics Hall of Fame.

During a recent ceremony at Jenkins to mark the signing, Puckett became emotional while thanking those who have helped him along the way.

“What can I say about this one here?” he said referring to his mother, Misty Sexton, who was sitting beside him. “Words can’t describe what she’s done for me all these years. We’ve been on our own for most of our lives, me and my sister and my mom, and anything I need she’s always there for me and I can always depend on her.”