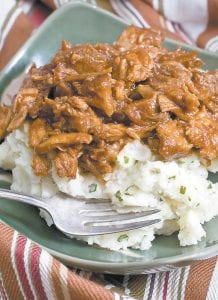 This photo shows a stovetop-created cider-barbecue pulled pork over mashed potatoes. This pulled pork recipe, which appears on this page at left, is very simple yet filling meal. (AP Photo/Larry Crowe)

This dish started as a threeingredient slow cooker recipe. And I completely messed it up.

I’d read another recipe that called for combining pork butt, a bottle of cola and a bottle of barbecue sauce in the slow cooker, then walking away. Seemed interesting, though the cola idea made me want to gag (and yes, I know lots of people cook with cola).

I tried it, substituting a bottle of hard cider for the cola. It was great, except that after six hours in the slow cooker the sauce was still way too liquidy. I ended up dumping the whole thing into a saucepan and boiling it until the sauce was reduced and thick.

That made me wonder why I bothered with the slow cooker at all. Why not just do the whole thing on the stovetop? It would be much faster, there would be less cleanup and it would solve my liquid issues.

To make this new approach work, I needed to change the cut of pork, but boneless (country-style) ribs worked just fine And to make a meal of it, I tried the resulting quick-cook cider-barbecue pulled pork over mashed potatoes. It was amazing. Best yet, it was incredibly simple.

Though this recipe calls for hard cider (sold alongside beer), sweet cider (apple cider, etc.) could be substituted. And while it isn’t as quick as most weeknight recipes, it is almost entirely hands off .

In a large saucepan over medium high, combine the ribs, cider and barbecue sauce. Stir well, then bring to a boil. Reduce heat to maintain a steady simmer. Cook for 1 hour to 1-1/4 hours, or until the pork is very tender and the liquid is reduced and thick.

After 45 minutes, place the potatoes in a medium saucepan. Add enough cold water to cover, then bring to a boil over mediumhigh heat. Cook until the potatoes are tender. Drain the potatoes and return to the pot. Add the butter and milk, then mash. Mix in the parsley, then season with salt and pepper. Cover and set aside.

Use 2 forks to shred and pull apart the pork, mixing it with the sauce. Serve the pork over the mashed potatoes.

of the new cookbook “High
Flavor, Low Labor: Reinventing
Weeknight Cooking.” He can be
e-mailed at jhirsch@ap.org