Punishment for mine owner still being debated

By R. G. DUNLOP The Courier-Journal 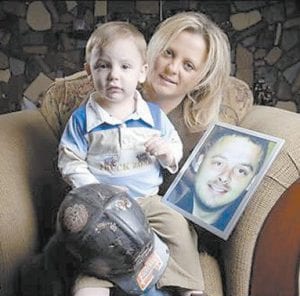 Stella Morris posed with son Landen, 2-1/2, in their home in Cumberland recently. (By Tim Webb/The Courier-Journal)

Deep underground and far from medical assistance, David “Bud” Morris was bleeding to death, his legs nearly severed below the knees by a loaded 30- ton coal-hauling machine that had just struck him from behind.

And the only person there trained to save him – Gary Wayne Bentley, a co-owner of H & D Mining Inc. near Cumberland in Harlan County – stood by, rendering no aid, according to state and federal investigative reports.

As Morris’ fellow miners struggled to help him, Bentley’s response was to bark an order: “Get him out of here,” according to a report by the U.S. Mine Safety and Health Administration.

Less than two hours after he was struck down, Morris, 29, who was married and had two sons, was dead.

Bentley “elected not to check or treat the patient,” even though medical professionals later said prompt medical assistance would have saved Morris’ life, the state’s report said.

More than two years after the Dec. 30, 2005, accident, the state Office of Mine Safety and Licensing still has not proposed penalties against the mine that are stringent enough to satisfy the panel that must approve them.

On Jan. 11, while rejecting the office’s fourth attempt to settle the case on terms highly favorable to Bentley, the state Mine Safety Review Commission in effect told the office how to resolve it:

Charge Bentley as a co-owner of the mine – which he has acknowledged being – rather than simply as a mine emergency technician employed by H & D.

That would enable the state to impose a substantial fine on Bentley. It also could bar him as an owner or operator in the coal industry if he were found to have placed Morris in imminent danger of serious injury or death by intentionally violating the law.

The commission invited the state to submit yet another proposed agreement and scheduled a hearing on Feb. 14.

Bryon Thompson, the commission’s hearing officer and general counsel, said he could not recall another case in which it has rejected so many settlement attempts by state mine-safety officials.

Johnny Greene, the safety office’s interim executive director, and Jennifer Cable Smock, the state attorney representing it in Bentley’s case, both declined last week to discuss it with The Courier-Journal.

Bentley did not respond to repeated telephone messages left at his most recent known telephone number at Jackhorn in Letcher County.

Dr. John Ludgate, a Virginia psychologist who has treated Bentley, asserted in letters filed with the commission that Bentley was suffering from “post traumatic stress disorder” related to Morris’ death.

Tony Oppegard, an attorney representing Morris’ widow, Stella Morris, called the proposed settlements with Bentley a “sweetheart deal.” And he characterized the commission’s repeated rejections of them as a “clear rebuke” of the mine-safety office.

‘No sense of outrage’

“It’s just a case for (the agency) to get rid of,” said Oppegard, a former federal and state mine-safety official. “There’s certainly no sense of outrage. I would say it’s detrimental to mine safety if someone like Bentley thought he could ignore a dying miner and then get nothing more than a slap on the wrist.”

Unlike Bentley, Morris’s fellow miners – though unschooled in the fine points of first aid – struggled frantically but fruitlessly to help. Among them was foreman James Couch, who should have been trained by the company but was not. Couch tried to apply crude bandages above Morris’ knees to quell the blood flow.

Morris’ co-workers testified under oath to state and federal authorities that with his legs crudely bandaged, he was loaded into another mine vehicle for the bumpy, 20-minute trip to the surface. He was not placed on a backboard. He was not covered with a blanket to prevent shock.

Three miners accompanied Morris, according to the investigative reports. Morris sat upright, leaning against one of them. Bentley rode another vehicle, according to MSHA.

Once outside, Morris continued to bleed, waiting at least 20 more minutes for the ambulance that had been summoned from Harlan, 25 miles away. Miners had tied pieces of rope to each of his legs above the knee, but no dressings or tourniquets were applied. No pressure points were used. His legs were not elevated, according to the federal investigation.

Watching Morris’ life ebb, his co-workers finally decided they could delay no longer. They loaded him into the back of a pickup for the trip to the hospital. As the truck neared the bottom of the mine access road, the ambulance arrived and took Morris aboard.

The initial complaint filed against Bentley by the minesafety office on July 17, 2006, accused him of failing to treat Morris “in a responsible manner,” and of “actions and statements made to investigators” that impeded the investigation into Morris’ death.

Mark York, a spokesman for the state Environmental and Public Protection Cabinet, said the latter allegation stemmed from investigators’ conclusion that Bentley “did not give a truthful statement” to them.

Oppegard, who sat in on the witness interviews, said in documents filed in the case that no one supported Bentley’s claim that he rendered aid, and that other miners who were present said Bentley “never touched Morris.”

Still, the mine-safety office’s complaint sought only minor sanctions against Bentley: permanently barring him from being a mine emergency technician and revoking for a year his other mining-related certifications.

Then the office and Smock sought to settle the case on terms even more favorable to Bentley. They proposed probating, rather than revoking, his other miningrelated certifications and said that doing so was “in the public interest.”

Bentley was never required to testify or to otherwise admit re- sponsibility. Indeed, the proposed settlement agreements specifically allowed him to deny that he violated the law. He would simply acknowledge that the Mine Safety Review Commission could “reasonably find” that the alleged violations occurred.

No sanctions as owner

But the state still did not charge Bentley as a co-owner of the mine, leaving the possibility that he could still function as an operator. In its order last week rejecting the fourth proposed settlement, the commission pointedly noted that a settlement “would better resolve coal miner safety concerns” if Bentley’s ability to own or operate a coal mine “were prohibited.”

The mine-safety office also has taken no disciplinary action against Donald Eural Allen, who was driving the vehicle that struck Morris. State law prohibits impaired miners from working underground, and the federal report said a subsequent drug test disclosed opiates and marijuana in Allen’s system.

A phone number for Allen was not in service this week, and he couldn’t be reached for comment.

Oxycodone and marijuana also were found in urine and blood samples taken from Morris at the hospital, according to the report.

Stella Morris works part time at a Cumberland tobacco outlet and raises her 2 1/2-year-old son, Landen (Bud Morris also had a son from a previous marriage). She readily acknowledged in an interview that her husband had had a drug problem. But she said that she thought he had gotten it under control, and that she was unaware at the time that he had used drugs shortly before he died.

Stella Morris said she firmly believes that no impaired miner should be working underground, and that she has told miners who questioned why she had spoken out in support of drug testing: “I’m trying to save your life.”

She has listened to the taped interviews with witnesses. And she has heard Bud Morris’ coworkers recount their efforts to help him.

Recalling the circumstances of his death, she said they aptly sum up why she thinks Bentley should be barred from the industry: to protect other miners.

“He was the only guy trained to do anything, and he let my husband die,” she said. “I don’t think other miners should be at risk like that.”

R.G. Dunlop is an investigative reporter for The Courier- Journal of Louisville, where this report originally appeared.