Put a bow on it! Our obsession with gift wrap 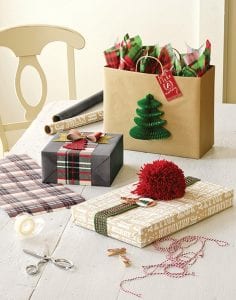 Some of us hate it enough to pay someone else to do it. Others take delight in folding corners just so, or the challenge of covering uneven angles, not to mention the seemingly endless varieties of design and texture.

But why do we wrap gifts in paper in the first place?

As with so many modern practices, it dates back to ancient cultures. First came the Chinese and their priceless gift of the invention of paper in 105 A.D. That was followed in the eighth century by the Japanese “furoshiki” and Korean “bojagi,” reusable wrapping cloths originally designed for transporting goods or preventing clothing mix-ups in traditional baths, as well as covering gifts.

By 1509, a new English invention appropriately dubbed wallpaper filled a similarly dual purpose, but not for long, since it easily cracked and tore upon folding. The Victorians, whose notions of decor are considered “fussy” by many nowadays, applied a like aesthetic to their gift wrapping, using elaborately decorated paper adorned with ribbons and lace. But that paper also was heavy and rather unwieldy. It gave way in the early 20th century to colored tissue … which is still in use today, but more as an interior covering.

So what happened in between?

Chalk it up to yet another example of necessity being the mother of invention. In 1917, holiday business boomed so well for a couple of stationery store-owning brothers in Kansas City, Missouri, that they ran out of colored tissue paper. Fortunately, a search of their inventory yielded a supply of “fancy French paper” designed for lining envelopes. In the true spirit of American ingenuity, they put it on sale at 10 cents a sheet.

Guess what was snapped up in a Kansas City minute?

The enterprising brothers tried their experiment again the following year, and the year after that. Finally convinced they were on to something, they began designing and producing their own decorative paper, solely for the purpose of wrapping gifts.

Still, let’s face it — gift wrap isn’t practical. In fact, it’s downright wasteful. So why do we spend more than $2 billion on it every year?

Maybe it’s because, as research has suggested, we feel more positive about a gift that is wrapped. Or maybe it’s just because that paper is so darned pretty.

Whatever the case, those two brothers from Kansas City knew a good thing when they stumbled upon it. Because, in case you hadn’t guessed it, their last name was Hall. As in Joyce and Rollie Hall.