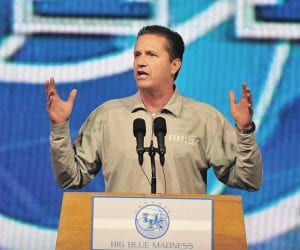 YOUNGER DAYS — Coach John Calipari at a press conference before his first season at Kentucky 10 years ago. (Bill Thiry/Kentucky Today)

Kentucky men’s basketball coach John Calipari touched on a variety of topics when meeting with select members of the media last month to preview the upcoming season. Calipari provided a glimpse into what to expect this season.

“If we’re really going to be good, it will be because we’re outstanding defensively,” he said. “The biggest thing about this team is (it has) the Brandon Knight culture, which is (spending) time in the gym. That’s what this group that walked in here, they’ve been in the gym. They just love the game, they love getting better and they love competing. That’s fun for them. Not running around and can’t wait until this is over is (so) I can go (do something else). That’s not who they are. They love being in the gym. The teams I’ve had that way, normally, they’re reaching beyond what you think they should be able to do. Those kind of teams.”

Q: Did you see this coming when you recruited the current class?

A: “You kind of knew (how they would be). I didn’t know that Keldon (Johnson) was to that level. I didn’t know Tyler (Herro) was (to that level) even though his dad kept telling me, believe me, he will be in the gym all day. I didn’t know that though. I knew Immanuel (Quickley) was like that. What you have is, with Ashton (Hagans) and those guys, is, all of the sudden, you have four and five players (who) start challenging the other guys. When you’re not in there, they all know it. It isn’t like there is a secret. These are the guys spending the most time with this. Last year the guy that spent the most time in the gym, and spent the most time at this was, Shai (Gilgeous-Alexander) and it wasn’t close. He went from our 12th player who no one knew to a lottery pick. It’s good.”

Q: What do you see in this team and how it resembles Brandon Knight?

A: “Brandon Knight changed the direction in what we wanted and how we wanted it done. He took that to another level and we ran with that for a while. Then sometimes you get away (from that). You get a group (where) either the game comes easy for them to this point and they’re enabled and then reality hits. Michael (Kidd-Gilchrist) drove that group (2011-12) to approach it differently. We had some veterans on that team. This could be similar to that, in that with Reid (Travis) walking in, he is a veteran, but he gets after it. He works, he’s in the gym a lot and it’s a good mix. They’re going to help each other. The young kids have no idea what they’re about to face. The veterans do. It’s a good group and a good veteran group. Someone said, ‘What do you like about your team?’ I said, ‘I’ve got some vets, some older players.’”

Q: What about the current culture of the program?

A: “Players drive the culture. It’s not the other way around. The culture here has always been about putting in the work, being committed to the game and sacrificing. If you don’t sacrifice, you can’t play here. If you don’t give up something, you don’t play here. You’re not taking 30 shots here. It’s not how it is. That culture of achievement and personal achievement along with team achievement is a culture that we developed here. Being responsible, being responsible for each other.”

Q: What did you take from the Bahamas trip in August?

A: “What we walked away from was, we got a lot of guys (and) who is going to be the catalyst? Who is going to be the guy that can change the game for three or four minutes to help you win? Who is that? I’m not sure who that will be. You try to have one, two or three of those who you can. If you do, your team is really, really good. In other words, someone has got to be as good as anyone else in the country — for three minutes, he can just change the game and now, we can go win a game. I don’t know who that is going to be for this team. That will probably play out. … We learned a lot, I didn’t see anyone on our team who was afraid. As a matter of fact, some guys played better there than they did in practice. When we had Brandon Knight, that was the case. Brandon was OK in the practices and I started getting worried and then we went to Canada and he was the one guy that just stood out. He took everything to another level.”

Q: What about the schedule this season?

A: “This will be a grind because of the schedule. The schedule is a grind. The good news for me is that I don’t remember, because of how I think, I’m not thinking back (on) three years of misery to get them (playing the right way) and then the anxiety of, are they going to get it? The other team of years has gotten it and this team hasn’t and then they get it. I only remember that they got it. I remember we made a run and we were right there and we were right there again. That’s what I remember. Even with last year’s team, how we finished and what we did. That’s what’s in my mind, not the misery of this. Believe me, every season we go through, you remember the team that was 38-0, I think our first two (Southeastern Conference games) went to overtime. You’re like, we’re not that good, but then all of the sudden we started getting better and there was a time, we were like, maybe we’re not as good as everybody thinks.”

Q: What are your thoughts on the changes to the RPI?

A: “I was on that committee that recommended it and my feeling was, you had people gaming the RPI that are playing schedules that are gaming the system and then all the sudden they start playing themselves and nothing moves and now they get nine teams in and eight of them lose right away. I’ve always looked at efficiencies, because I think that talks about the strength of your team. What they’ve put together was a combination. What does it do for Kentucky? I don’t think it does much to us, and may even hurt us a little bit, but I thought for the rest of our league, and for teams, whether it would be the Atlantic-10 or Conference USA, where I’ve worked before, it gives them a fighting chance.”

Q: Your thoughts on the proposed changes to college basketball following the FBI scandal?

A: “It’s morphed in how we evaluate players and some of the changes I don’t agree with. With the Top 20 players and should we get rid of the one-and-done, I’m good with that. But why are we doing, a player stays in the draft and then a week later can come back to school? That’s not a Top 20 player, that’s a Top 150 player, why are we worrying about that? Kids going directly to the NBA? I’m good. Kids going directly to the Gleague and I’m not good with that. For society, if we’re going to encourage young people to pass on education to take a stab at being professional, I’m totally against it. I’ll be on mountaintops and on top of buildings screaming, so when I’m done and 30 years from now and you’re looking at where I stood on things and people will say he was against it and see what has happened, my guess is, they will say, he was right.”