Q. and A. with Alison Krauss 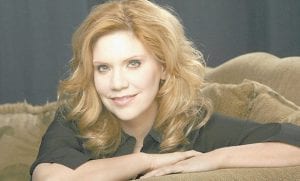 Alison Krauss’ new album, “A Hundred Miles or More: A Collection,” is more a compilation of side projects than a true solo disc.

The 16 tracks reflect Krauss’ broad musical taste, from the oldtimey “Down To the River to Pray” from the “O Brother, Where Art Thou?” movie soundtrack to a remake of John Waite’s ’80s pop hit “Missing You.” Most are collaborations with other artists and cuts from film soundtracks and tribute albums, but there also are five new songs Krauss sang and produced.

Krauss, who perform in concert at Rupp Arena in Lexington on July 24 as part of a spring and summer tour with Union Station (the group she joined more than 20 years ago as a teen prodigy), spoke recently with The Associated Press about her music, her work as a producer and her upcoming album with former Led Zeppelin frontman Robert Plant.

AP: Do you ever feel limited by being in a band?

Krauss: Not at all. The band records are very inspiring and satisfying. That’s the stuff that you really sink your teeth into. That’s when I really feel that I’m growing or stretching in any way.

AP: Why did you decide to release “A Hundred Miles or More”?

Krauss: I don’t look at it as a solo record because so much of it came from someplace else. It was someone else’s choice of material and production, which was wonderful because I love getting to deliver whatever they’re asking for. I really liked how those tunes turned out, and the things I had sitting around was material I liked that I didn’t necessarily think would fit with our band. It all came together in a nice way. It all fit together and had a mood.

AP: One of the new songs, “Jacob’s Dream,” is a tragic story about two little boys who perish in the mountains. Is it a true story?

Krauss: Yes. The gal who wrote it, Julie Lee … it was a story she heard growing up from where she was raised. There’s a monument to those children in the woods there. She wrote that tune with John Pennell, who started this band (Union Station) over 20 years ago. I loved that tune the first time I heard it. From the first line, I knew it wasn’t going to be good.

AP: Are you drawn to sad songs?

Krauss: Not consciously. I’m moved by stories about people’s experiences. I try to put myself in their shoes. I seem to be able to experience those feelings with those sad songs.

AP: You’ve been described as a song collector, as someone who has a knack for finding obscure songs and obscure writers and bringing them to public attention. Do you think that’s true? Is it a passion of yours?

Krauss: It is a passion. I write so little. I can edit, but I don’t write. So I am fascinated by that ability in people. When you find something you can relate to that will manipulate your emotions like a well-written song, it’s a very passionate process. It’s very exciting.

AP: You’ve recorded with many different artists over the years. Is there a style of music you haven’t touched on that you’d like to?

Krauss: I’d love to sing some traditional country sometime. I think it would be fun. I haven’t done much of that with the pedal steel and everything.

AP: You produced Alan Jackson’s last album, “Like Red on a Rose.” There must be a lot of responsibility in shepherding someone else’s project.

Krauss: Producing is a very emotional experience because you are on somebody else’s time, somebody else’s schedule. But I enjoyed it with Alan because I got to view a kind of voice that I never got to be close to. I got to spend time with a very, very strong male country voice. I learned an awful lot about singing, as much as I had in the past 20 years. He never sang the same thing twice.

AP: People in Nashville have been talking about your upcoming album with Robert Plant. He’s such an influential figure in rock. Can you talk about it?

Krauss: We made an album together that will be out next fall. I have kept in touch with Robert for the past six years on and off, and he suggested making a record together. I suggested TBone Burnett (producer) and he did a wonderful job of collecting material. We had a great time.

AP: Did he write any of the songs?

Krauss: It’s a variety of things. There is something Robert wrote.

AP: Will there be a tour? Krauss: A tour is in the works.