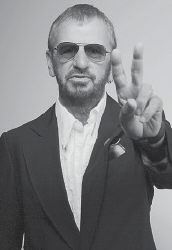 Forget “When I’m 64.” Ringo Starr has that age in his rearview mirror.

But the 67-year-old ex-Beatle still has the musical drive and looks of a rock ‘n’ roller half his age. And he acts it, too.

Seated recently in a swank hotel room in Beverly Hills, Starr looked slender in a blazer and slim-fit jeans flecked with blue pen scratches (his own scribblings, he disclosed).

His customary shades only left his face once, exchanged for a tinted pair of glasses. For the past 20 years, Starr’s eyes have remained well hidden, symbolic of his rock-star cool.

“Photograph: The Very Best of Ringo Starr” – culled from his solo career and label-spanning collection of tunes from 1970-2005 – arrived in CD racks this week. Between sips of water, Starr cracked jokes and chatted with The Associated Press about aging, the past and staying in the game.

AP: How did you pick the songs for the new album?

Starr: Actually, we had a set of tracks we could use, going back to Capitol in the early days. What was great was Capitol/EMI expanded it, which they don’t usually do. Usually the label only uses tunes from the label. They actually went and got tracks off 2005’s “Choose Love” CD, off different labels. It’s a great representation of the stuff I’ve done in the last 400 years.

AP: Any favorites in particular? The “No-No Song,” from 1974, was so facetious about hard partying.

Starr: I have great memories of when we recorded that, because the last thing any of us were doing was saying “no” in those days. Things have changed, of course. “Photograph” is beautiful. That’s one of the best songs I’ve ever written. I was writing it with George Harrison, so that also helped. In those days, and still to this day, I only play three chords. I’d write these songs, and then I’d give them to George and he would put in 10 more chords, and they’d think I was the genius.

Starr: You’ll have to speak up (laughs).

AP: And it was also the 40th anniversary of the Beatles’ “Sgt. Pepper’s Lonely Hearts Club Band.”

AP: How does that feel, to go from that album to where you are now?

Starr: When you’re making it you don’t think of “now.” That’s the deal. Forty years later, did I think I would be talking about this record? No. It was the last thought in anybody’s mind, that we were making these records that were going forever. We were just enjoying the part of making records.

Starr: That’s just how he is. We were actually talking about going to see Bob, and seeing Bob many times, and you get what Bob gives you. The last time I saw him, it was hard to recognize the songs. But the time before, he was clear as a bell. Bob is great. He just had a No. 1 record and that’s what it’s about.

I’m in the game, I’m still making records, I’m still playing. Maybe tomorrow, a hit, who knows. I haven’t had a hit in a long time. It could be the next CD, who knows. We’re in it to play.

AP: Has the creative process changed?

Starr: It hasn’t changed at all. You write your songs, you play your drums. You get some friends around, and you make a record. … They would like me to make a duets album, like Santana did. Nothing against it, but that’s what he did and it was a huge thing. I don’t really want to do that. I have a lot of guests on my CDs anyway, like Chrissie Hynde and Willie Nelson.

AP: Any acting roles on the horizon?

Starr: I used to have a thing for acting. It’s been quite a while now, and I’ve decided there’s enough actors, they can do it. I started to refocus more on the music. … I can’t commit that far in the future now (for TV or movie roles). Call me in 2010, see if I’m free. I live day to day, have a good life.

AP: When are you touring again?

AP: There’s been a story, for years, that you used to put a packet of cigarettes on your drum snare to muffle its sound. What was that about?

Starr: It was too bright. I’ve always liked a deep sound, and so I put my pack of cigarettes on it, to take it down a notch. Then I started putting tea towels on top of everything. Then I put towels on every drum. I gave it that deeper quality.

AP: You can use the towels to wipe off sweat, too.

Starr: Oh yes, I can! And have a cigarette after. But no, I don’t do that anymore.