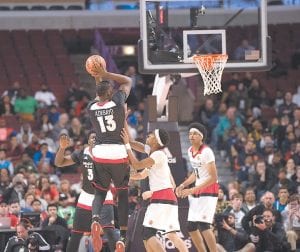 Bam Adebayo is one of the freshman players that has Kentucky assistant coach John Robic already excited about next season. (McDonald’s All-American Photo)

New Kentucky offensive coordinator Eddie Gran got to see UK’s returning players practice and scrimmage in April. Now he’s busy contemplating plans for the upcoming season as well as figuring out how to best use his returning players while projecting how new players might figure into the playing rotations.

Gran came to UK from Cincinnati where he led a successful offense. He also brought quarterbacks coach Darin Hinshaw with him.

Recently Gran sat down to talk about lies ahead for the Cats this summer as well as some specific players.

Question: What do you do during the summer to learn more about your players?

Gran: “We get an opportunity now to be with our players out there in the summer at certain times. Now we can go out there and coach a little bit and instruct with no footballs out there. During the spring we had to get them to know what to do. Now going into August camp you have to detail all the fundamentals. Each position has drills to work on individually to improve.”

Question: Did you learn specific things about individual players in spring practice that help you make summer changes?

Gran: “Each coach met with each player after the springs and evaluated all things to work on. For offensive lineman, might be pass set versus speed rusher. Each individual has three things we give them to work on during the summer given to them by their position coach so we can get better.”

Question: For a player like senior running back JoJo Kemp who says he wants to be more of a vocal leader, are you seeing signs of that?

Gran: “I think so. JoJo has to understand when it is work time and when it is play time. That’s the one thing I talked to him about. He is vocal and confident, which is good. But you also have to act like a pro and act like you have been there. That’s what we are learning to do and he is getting better at that and should be a great leader for us.”

Question: Kemp has had that same issue for three years of not always being serious, so is that his personality that he can’t keep help himself?

Question: How do you feel overall about the running backs?

Gran: “I think we are deep and have a lot of guys that are competing. I know nothing about Boom Williams, so right now the ones I am counting on are the ones I had this spring. Boom is rehabbing and doing everything he is supposed to do, so we will see. It will be wide open, but I like it because they are competing every day and they are trying to get on the field.”

Question: How do you and quarterback coach Darin Hinshaw seem to stay on the same page?

Gran: “We complement each other in a lot of ways but what we do is communicate. There is never something being said out of his mouth or my mouth that is different to the quarterback, offensive line. Everybody is on the same page. Being with other really great coordinators, that’s what you have to do. John Schlarman saying same things we are. If you are doing that, then you have a chance.”

Question: Why leave a program going so well at Cincinnati for UK? Is this a career gamble for you?

Gran: “It doesn’t matter where you are at in this profession. It was the right time to be with a great man in Mark Stoops. I think what they have done the last four years has been unbelievable. I am coming in at a great time. They are hungry. They have had some unfortunate situations. They know they were close to winning a lot more games. Whatever it takes to get to the next step is what we are going to try and do. But to me, it is not a gamble. To me, it is a great opportunity.”

Question: Has your perception of Kentucky football changed in the last six months?

Gran: “The whole program just in terms of this community and how much they love football … I guess the perception is basketball school. I am finding out this is a big-time football school also. The people love football and they support it. That excites me. The administration has done a phenomenal job doing what it did with stadium. Now a new complex to move into. Football going the right direction.”

Question: Do you have fourthquarter playmakers that can win games?