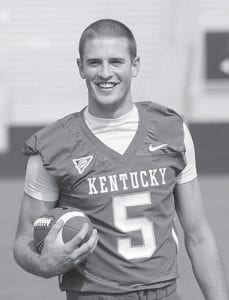 Curtis Pulley’s off-field problems never allowed him to live up to his on-field promise.

The talented but troubled Kentucky quarterback was dismissed from the team Tuesday by coach Rich Brooks for a violation of team rules, a move that hands the starting quarterback job Pulley long coveted to sophomore Mike Hartline.

“I’m in the business of taking a young man and building him into a responsible young man, and obviously I feel like I’ve failed in this situation,” Brooks said. “Sometimes for the better good of the whole, some parts have to be sacrificed.”

The dismissal follows a turbulent offseason for Pulley that included a pair of run-ins with police. Pulley was arrested on traffic charges in Hardin County on July 22 and pleaded guilty to speeding in district court last week. He received a citation for marijuana possession in Louisville in June.

Brooks said last week Pulley would miss playing time because of his legal troubles but still had a chance to win the starting job. The coach reconsidered after getting more details on Pulley’s situation.

“There is basically a little more as I delved into it than I was aware of at the time,” Brooks said.

The decision came as a “shock” to Hartline, who will likely be the starter when the Wildcats open the season at Louisville on Aug. 31.

“I knew he was going to get in some playing time troubles,” Hartline said. “But in the end it’s all about what you have and how you plan to move on. Since he’s not on our team anymore, it’s tragic and everybody wants him on our team, but we can’t really dwell on it.”

Brooks said he’s not concerned about Hartline’s ability to lead the Wildcats, though he would have preferred to give the job to Hartline based on merit, not necessity.

“I had hoped this wouldn’t be the way that the starting quarterback would be named,” Brooks said. “I would have rather have done it on the field and without controversy.”

Controversy, however, seemed to dog Pulley nearly from the moment he stepped on campus.

Pulley played sporadically at wide receiver and quarterback in 2005 and 2006, but left school briefly after losing a quarterback battle with Andre Woodson. He returned last fall and starred on the offensive scout team and appeared to have turned a corner during the spring, showing flashes of brilliance at times during the team’s annual Blue-White game. Pulley passed for 134 yards and ran for another 82, including the game-clinching 17- yard touchdown in the final minute.

Brooks said afterward he was in no hurry to name a starter, though Phillips hinted during the summer that Hartline had gained an edge during offseason workouts by displaying the kind of leadership qualities Phillips is looking for in a quarterback.

“(Curtis) had improved, it wasn’t as bad as it was the year he lost his job to Andre,” Phillips said. “We just thought that Mike was the guy that was leading the guys the right way. Curtis was better, but Mike was ahead of him in the area as far as leading.”

Pulley has two years of eligibility remaining, and Brooks said he anticipates Pulley transferring to a Football Championship Subdivision school.

Brooks said he wasn’t trying to send a message by dismissing Pulley but felt it may have shown his players that they will be held accountable for their actions both on and off the field.

“I’d like to think we try to keep a fairly high standard here,” Brooks said. “I want to continue that, but it still breaks my heart any time something like that happens.”