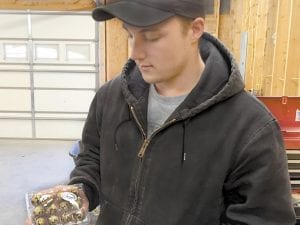 EGG MAN — What began as a hobby for Aaron Halcomb has become a potential moneymaker as he is using the Internet to sell quail eggs all across the nation. Halcomb, 21, is pictured with a dozen of the eggs.

What began a few months ago as a new hobby is turning into some extra income for a young Letcher County man.

While surfing the Internet late last fall, Aaron Halcomb grew interested in raising Coturnix quail — tiny fowl that are raised for both their meat and eggs. After building a small cage that he keeps in his garage, Halcomb ordered enough of the birds, also known as Japanese quail, to get started. For the past four months, he has been shipping dozens of the small eggs all across the country after finding buyers through eBay and other e-commerce sites.

Halcomb, a 21-year-old National Guardsman and college student from Whitesburg, said buyers of his quail eggs — which carry both the “Appalachian Proud” and “Kentucky Proud” certifications on their packaging — use them for eating and for hatching (quail eggs and quail meat are considered delicacies).

Halcomb also sells the eggs locally. One local buyer is Chris Caudill, who said he, his 14-year-old daughter Laken, and two of Laken’s cousins who were visiting from Indiana, Reece and Ava Pruitt, had a memorable time recently boiling 24 of the speckled brown eggs and making them into deviled eggs. 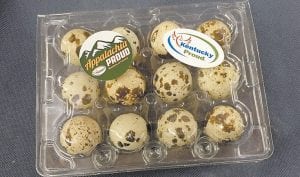 “It was fun as heck, I’ll tell you,” said Caudill, maintenance director for the City of Whitesburg. “Those girls loved it.”

He said the deviled quail eggs were no harder to prepare than regular eggs, but warned that it only takes two minutes to boil them.

“It was 48 bites of heaven,” Caudill said. “They are just a little bit sweeter than a regular egg.”

Gourmet restaurants often top deviled quail eggs with caviar or serve them hard-boiled as a salad topper. In addition to boiling them or serving them as deviled eggs, quail eggs can be served scrambled, poached, fried, baked, or any other way a regular chicken egg is cooked. They can also be pickled.

“I’ve yet to eat any of the eggs myself,” Halcomb said Tuesday as he looked in on about 100 Coturnix quail chicks that were hatched just a few days ago. 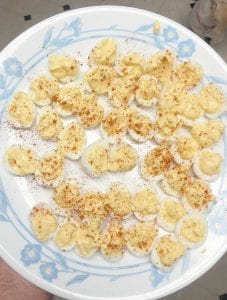 “Forty-eight bites of heaven,” is how Chris Caudill described these two-dozen quail eggs he made into deviled eggs recently.

According to Halcomb, the chicks will turn into laying hens in about six weeks, at which time they will lay an egg a day for the rest or their lives (the life expectancy of Coturnix quail is only about three years).

He said he “wasn’t really trying to make any money” from the quail when he first obtained them, but has since learned that they and their eggs can be turned into extra income.

“ They’re small and they’re real easy to take care of,” said Halcomb, a Jenkins High School graduate who attends classes at the Whitesburg campus of Southeast Kentucky Community and Technical College when he is not working at the City of Whitesburg’s water treatment plant.

Coturnix quail are native to Europe, Asia and Africa, and have been raised in Japan for hundreds of years. 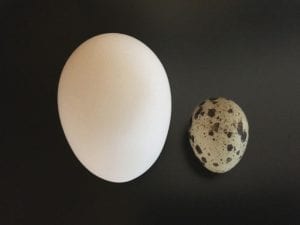 A quail egg furnished by Aaron Halcomb (right) is compared to a regular chicken egg.

Referred to as “Bible quail” by early American colonists, the Coturnix quail have often been praised for the ease in which they can be raised in small spaces, both in the city and in the country.

“Coturnix quail require no more care than do chickens, but they mature faster, produce more eggs, need less food and space, and have more uses than virtually any other kind of domestic poultry,” Richard Buchholz wrote for Mother Earth News back in 1981 after raising a covey of the birds on the balcony of his high-rise apartment in New York City.

Halcomb said he already has earned more from selling the quail eggs than it has cost him to buy and care for the birds. “I’ve made more off them than I’ve got in them,” he said, adding that it costs only $12 for the 50-pound bag of food his quail go through every six weeks.

Halcomb, a psychology major who hopes to someday find work in probation and parole, has applied for a $5,000 grant that would enable him to expand his quail farming operation.

In addition to bolstering his Coturnix quail operation, he would like to be able to purchase incubators and other equipment needed to farm Bobwhite quail, which, while indigenous to the United States, are in great demand because they have lost so much of their native habitat.

“The main thing I want to do it breed Bobwhites,” said Halcomb, who lives in West Whitesburg with his wife, Kristiana. “They sell like hotcakes.”

While the economy in Letcher County and elsewhere in southeastern Kentucky remains extremely challenged by drastic cuts in coal production, Halcomb found that it wasn’t too difficult to do the research required to come up with a way to supplement his income.

“I just read up on some stuff on the Internet and got interested and figured I’d give it a shot,” he said. “I really wasn’t trying to make money off it — just as a hobby. Now I like it.”

“Anything he wants to do he can do,” said Halcomb’s mother, Kim Fultz Halcomb.