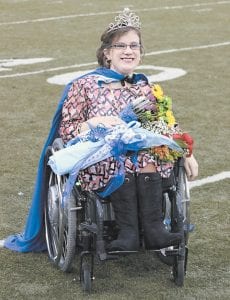 With her father Therman Begley by her side, Casey Begley cried Friday night as she was crowned homecoming queen at Letcher County Central High School.

“It feels really good to know that they love me and voted for me,” said Begley, of Camp Branch.

Courtney Venters, one of eight LCCHS homecoming queen candidates, said it was more important for Begley to win than it was for her and the others to receive the coveted title.

“She is very nice and very sweet,” said Venters. “We think she deserved to win.”

Begley has spina bifida, a congenital disorder caused by the incomplete development of the spinal column. She is confined to a wheelchair. On average, eight babies born each day in the United States have spina bifida or a similar birth defect of the spine and brain, according to the Spina Bifida Association’s website.

Begley garnered a majority of the votes, said Lisa Wagoner, a secretary at LCCHS. 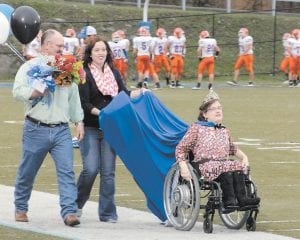 “I thought that was awesome,” said Markie Halcomb, who served as Casey’s instructional assistant at West Whitesburg Elementary School from kindergarten through fifth grade. “I know (other queen candidates) wanted it as much as she did, but they put their wants aside and campaigned for her. That’s heartbreaking that they care that much for her.”

Casey got a standing ovation when her name was called over the loudspeaker at the football field.

Casey was surprised when she found out on August 29, her 18th birthday, that she was a candidate. Casey, her mother Barbara Begley and Halcomb traveled to Pikeville to pick out a dress for her to wear at homecoming. Her hair was styled at a salon. She wore makeup, something she said she only has done for junior prom and homecoming.

“ It touched my heart that they care that much,” said Barbara Begley. “You just don’t realize how many people do care until something like this happens.”

“ Ever ybody knows Casey,” said Stephanie Blair, an instructional assistant at LCCHS. “She was so excited she got nominated. She didn’t realize she was a queen candidate. She just thought she was a part of the court.”

Halcomb said Begley is strong willed and doesn’t ask others for help.

“She’s stubborn in her ways,” said Halcomb. “She’s the daughter I never had.”

The Begleys have always encouraged their daughter to have hobbies and to participate in extracurricular activities. She took ballet lessons as a child and joined the Girl Scouts. She played on a Pee Wee basketball team and threw the ball in when it went out of bounds. She also played tee ball in Virgie in Pike County.

“We’ve always told her she can do anything she wants to do,” said Barbara Begley. “Whatever she wanted to do, we were willing to do.”

Each January, Casey and her father participate in a mobility impairment deer hunt at Jenny Wiley State Park. She killed her first deer in 2008.

Casey enjoys going to LCCHS sporting events with her parents. She has attended several parties hosted by the Spina Bifida Association and has made friends with other teenagers who have spina bifida.

The Begleys have raised money for the Spina Bifida Association by collecting donations and baking and selling desserts. They also assisted with a motorcycle fund-raiser.

Barbara Begley said her daughter is an inspiration.

“I’m just so proud of her, not that she is a homecoming queen, but that she is herself,” said Barbara Begley. “She’s just Casey.”

Casey has always gone above and beyond and she doesn’t make excuses for herself, said Mike Melton, LCCHS athletic director and social studies teacher said.

“ She is a wonderful young lady — very humble and a gracious queen,” said Melton.