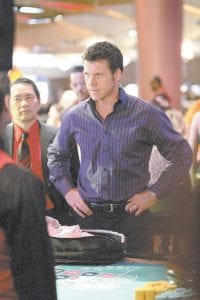 The world stood still recently as the broadcast networks unveiled their new schedules.

Everyone rejoiced at the announcement that, no, NBC wasn’t axing “Law & Order,” while “Veronica Mars” fans grieved at news of its demise. Viewers began counting the days until Kelsey (“Frasier”) Grammer and Patricia (“Everybody Loves Raymond”) Heaton return to us paired in the Fox sitcom “Back to You.”

And we all were left shaking our heads over the Geico-commercial evolved “Cavemen.” (Will Geico issue ABC a policy to cover this sitcom in the event of sudden death?)

The announcements sure were exciting. But now that life and our collective pulse rate are getting back to normal, what do we really know about the new shows awaiting us come fall?

Not much. Nor is there any reason, come to think of it, for viewers gratefully ushering in the summer months to care about anything fall has in store.

But TV critics care. So let’s press on.

For one thing, it’s such a temptation to start handicapping the new series, even sight unseen.

Like that “Cavemen” show! Sounds awfully lame, doesn’t it? So lame, in fact, it could make you forget a fundamental rule of TV: There are no bad concepts, only bad execution.

Consider the concept for “Lost” (people stuck on an island who get along worse than “Survivor” castaways) or “House” (a doctor who’s ruder and even more dismissive than the doctors you deal with in real life). Execution, not the screwball concept, is what made those shows click.

So far, pretty much all we (and by “we” I mean critics as well as the rest of TV Nation) are privy to among the new fall crop are concepts.

Here’s the concept for CBS’ “Moonlight”: a vampire private eye.

Meet NBC’s “Chuck”: a computer nerd whose brain gets gorged with the government’s most sensitive secrets.

Not much to go on, huh? But now the journey has begun. As with every season, the truth will emerge, step by step, for the TV critic striving to judge each series’ merits.

Here is that path to enlightenment:

– The critic screens each show’s pilot.

– The critic then screens the overhauled pilot, which may have been re-shot, recast and, just for good measure, maybe also retitled. (NBC’s sci-fithriller “Fathom,” for instance, became “Surface” prior to its debut two years ago, then failed, as it would have by any other name.)

– If possible, the critic previews a couple more episodes before the show premieres. Another fundamental rule of TV reminds us that a pilot is like a first date: Even if it’s great, it doesn’t always signify relationship material.

Meanwhile, as critics dutifully compile their “pick hits” lists, they often lose sight of another factor that can make all the difference in whether or not any new show fulfills its potential: the shows it’s slotted before and after and opposite.

Unlike TV critics, conveniently beset by stacks of DVDs from the networks, most viewers will get their first crack at each show in its designated slot on the prime-time grid. There it will be found, or not, as just one of many options for the viewer at that hour.

The scheduling process (a complex system of strategies mixed with voodoo) is vital in determining a series’ destiny. Rest assured, it is no accident that on Mondays “K-Ville” (Fox’s gritty drama about cops in post- Katrina New Orleans) will follow the compatible “Prison Break,” counter-programmed against sitcoms and sci-fi”Heroes” on rival networks.

So keep in mind yet another of TV’s key rules: A show’s success is determined by four criteria: Location, location, the show itself, and location.

Granted, that rule could languish in the on-demand era. Besides the expanding access to what you want on TV when you want it (by fall, one-fifth of the nation’s TV homes will have DVRs, some able to record shows two at a time), you’re being offered more and more network episodes online – even as a sneak peek before its TV airing. This can boost the odds that a new show gains a foothold against its competition on the schedule.

Does this mean that viewers interested in “Private Practice” (the spinoff from ABC’s megahit “Grey’s Anatomy”) as well as the CW’s “Gossip Girl” (a comedy about a mystery blogger dishing up dirt at a snooty New York prep school) and NBC’s revival of “Bionic Woman” will have the opportunity to sample all three series – despite their being scheduled to air the same hour? Could be.

Will any of them be worth the viewer’s time? So far, that’s not so easy to say. Even for a caveman.

Frazier Moore is a national television columnist for The Associated Press. He can be reached at fmoore@ap.org