Quickley relies on his faith on and off the court 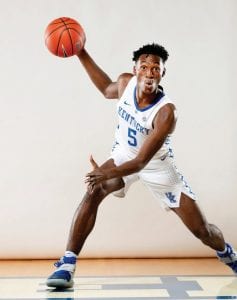 Immanuel Quickley isn’t getting caught up in the hype.

“I don’t really get into all of the expectation-type stuff, but I think I’ve done a pretty good job of fitting in so far and I’m just working to get better every day,” he said. “That’s the only thing I’m really worried about. I think everybody has done a really good job. We have a lot of talent and for all of us to come together (really early) I think that’s really good.”

Quickley doesn’t lack in confidence and relies on faith both on and off the court.

“I have confidence because I know where my confidence comes from,” he said. “I’ve always believed in God since I was a little kid. As long as you put hard work and trust it God, it will all work out. I don’t put any pressure on myself, especially with how much I’m in the gym,” he said. “As long as you’re in the gym working on the game of basketball, it keeps you (going).”

Quickley credits his parents, Nitrease and Marcellous, for his upbringing that has led to success on the court.

“That’s been the most important thing along with hard work,” he said. “I put all my faith and trust in God. My mom, along with the rest of my family, have done a really good job since I was a little child of putting that (in me).”

Quickley won a gold medal as a member of the Team USA U17 squad and said the competing overseas in the Bahamas was reminiscent of his past games against foreign competition.

“It is what I expected, with the physicality because overseas players are really strong,” he said. “We came together well and everybody was focused on the team. We played really good.”

So far in the preseason, Quickley hasn’t been surprised by the intensity in practice.

“It’s been tough, but it’s not been anything I didn’t expect,” he said. “Off the court, (coach John Calipari) is always teaching us to be professional, being early and not being late for anything, classes and stuff like that. It’s been pretty much everything I expected. It’s been a lot of fun.”

Quickley has spent most of his time learning game management.

“It’s something you really don’t have to worry about in high school, taking shots and getting everybody involved,” he said. “In high school I was taking all of the shots I could. In college, there are really good players around me and I’ve got to make sure I get the ball in their spots and where they want the ball, little things like that.”

Quickley, a point guard, has been inspired by Kentucky’s tradition and strives to continue the team’s trend of developing topnotch point guards. He said he came to Kentucky to “become a better player and help my teammates become better players.”

“Every time I work out, I see all off those NBA players on the wall,” he said. “It makes you just want to work that much harder, especially all of the point guards that have been through here.”

Quickly doesn’t compare himself to other point guard who have played at Kentucky in the Calipari era and wants to create his own legacy.

“I wouldn’t compare myself to particularly anybody, but I just like how they all played, honestly,” he said. “They all had different parts. Shai (Gilgeous- Alexander) was more methodical and slower and then you had De’Aaron Fox who was like John Wall, more fast-paced and up-tempo, but everybody is different with the different style of game and they’ve all been successful.”