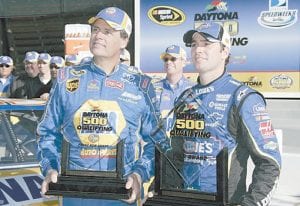 All was quiet – for a change – at Daytona International Speedway earlier this week, just the way NASCAR wanted it.

Cheating scandals rocked the Daytona 500 the previous two years, tarnishing NASCAR’s most prestigious event and turning the attention to the uglier side of racing. It made for a busy Monday and Tuesday at Daytona, which is traditionally closed to crews on those two days of Speedweeks.

Instead, NASCAR officials huddled in their offices to determine punishments, while the offending teams waited nervously for the hammer to drop.

Five teams were popped last season and six people were kicked out of the season opener, nearly turning NASCAR into a national laughingstock in the days leading up to the Super Bowl of racing.

Not so this year. The only Speedweeks drama so far has revolved around an alleged fat joke to Tony Stewart that may have earned Kurt Busch a left hook. It apparently happened in the NASCAR hauler – no one involved will discuss the particulars – but that hasn’t stopped the entire garage from spreading a tale that’s growing faster than Stewart’s hair.

But, hey, that sure beats talking about cheating.

NASCAR opened this year hoping to get back to the basics. After several changes, large and small, to its top series, chairman Brian France wants to make 2008 be about the action on the track and the characters who comprise the most popular form of racing in the United States.

The attention had shifted away from that in recent years, with sagging television ratings and a decline in attendance as fans grew bored with the racing and bland drivers afraid to show any emotion. France heard the rumblings and began to rethink NASCAR’s behavioral guidelines.

“We want the drivers to be themselves,” president Mike Helton said. “Our sport has done very well on (its) character … and the character of the sport is built by all the drivers that participate, as well as owners, the other penalties.”

So when Stewart and Busch tangled during a lively practice session on the first day of the season, the entire industry waited to see how NASCAR would react. The drivers made contact on the track, and an angry Busch repeatedly slammed his car into the side of Stewart’s as they headed toward pit road.

Stewart then blocked the entrance to the garage with his car, and appeared to be trying to get out of his car when his crew members rushed onto pit road to intercept him. Busch then drove his car around Stewart’s, and both drivers were called to NASCAR’s office.

A heated argument ensued inside, and perhaps even a punch. Unable to get the drivers to cool off, NASCAR kicked them out of the truck and told them to return in the morning when they’d calmed down a bit.

That second meeting was used to warn both drivers to steer clear of each other and stop messing around. NASCAR reserved the right to penalize them, but so far has done nothing.

Car owner Richard Childress said the entire incident was good for the sport.

“You’ve got to have a little controversy thrown in there,” he said. “You’ve got to have something to keep the fans excited and say ‘Hey, this is my man.’ I kind of enjoyed seeing it. As long as nobody gets hurt, a little scuffling never hurt anybody.”

The incident certainly didn’t hurt NASCAR, as overnight television ratings for both Saturday night’s Budweiser Shootout and Sunday’s qualifying for the Daytona 500 were both up from 2007. Fox’s broadcast of the Shootout was up 7.1 percent from last year, while qualifying was up 8 percent.

Dale Earnhardt Jr., winner of Saturday night’s race, came to Daytona skeptical of NASCAR’s plan to allow more emotion. But after watching the drama surrounding Busch vs. Stewart unfold, he changed his mind.

Not only does he now believe NASCAR is going to loosen the reigns, he thinks it will help lure fans back to the sport.

“I think the Web sites, the hits over the last 24 hours, 48 hours, I’ve heard some good things about that. It just brought a lot of attention to this race,” he said. “Speedweeks, you know, they needed a shot in the arm and what happened in practice gave it that.

“I think they are going to go back to letting us run over each other, so just get ready. I’m going to walk around with my dukes up all day long. Be ready, I’m telling you, you got to watch both hands.”

This is the stuff NASCAR wants people talking about. The excitement of Saturday night’s race, the fabulous finish in which Earnhardt pushed past Stewart to steal the win, and the feud between two former champions.

Series officials claim they want to return NASCAR to the way it was when the fans fell in love with it. So far they’re off to a pretty good start.