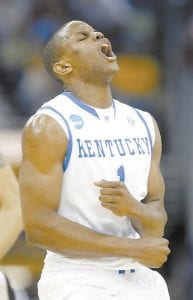 Kentucky sophomore Darius Miller is peaking at the right time for the Wildcats.

Miller exploded for a career-high 20 points in Kentucky’s 90-60 win over Wake Forest in the second round of the NCAA tournament. Miller made 7 of 9 field goals while grabbing nine rebounds as the Wildcats moved into the round of 16 for the first time since 2005.

It was the production coach John Calipari has been searching for from Miller all season. Miller has started 30 of Kentucky’s 36 games, but his inconsistent play has frustrated Calipari.

Calipari has stressed to Miller that he needs to play with more confidence and hopes Miller’s game against the Demon Deacons gives him a much-needed boost.