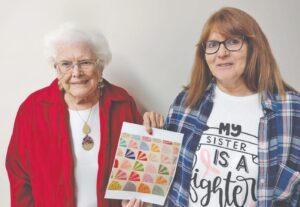 QUILT QUEST – Rachel Short, of Lexington, and her daughter, Beth Williams, of Campton, hold a photo of part of a friendship quilt made at Seco in 1932 and discovered in a house in North Carolina. The quilt is being returned to Letcher County after being gone 89 years. (Photo by Sam Adams)

It’s a long way from Seco, Kentucky, to Gastonia, North Carolina, and back.

For a friendship quilt, it can take 89 years. But it’s coming home now, not to Seco, but to the family of one of the women whose name is stitched across the patchworked Grandmother’s Fan pattern.

No one knows for sure how the quilt made it from the Seco Women’s Mission Society to Gastonia, but it’s coming back courtesy of two octogenarians, friends since ninth grade, who set out to solve a mystery. And that mystery led one of them, 83-year-old Rachel Short of Lexington, to come into the newspaper office Friday with her daughter, Beth Williams, who lives in Campton.

“I have lived in Lexington since 1963, but I’m originally from Gastonia, North Carolina,” Mrs. Short said. “One of my friends moved into her house in Gastonia in 1964.”

That friend, 85-year-old Irene Bivens, was just 28 when she and her family moved into the house on New Hope Road.

And in the attic was an iron bed with a quilt – The Quilt – spread out on it. Mrs. Bivens didn’t have time to think much on how it got there or where it came from.

“I moved in here with my husband and a one-year-old child and a four-year-old child, and I had a fulltime job, and I just forgot about it,” she said.

Jump ahead 57 years, and the then one-year-old Terri wanted her grandmother’s trunk from the attic to take to her home in Virginia. When she opened it up, there was the quilt sealed up in a plastic bag. She took it out, and embroidered on each fan blade in the quilt pattern were names. Lots of names – about 84, though some of the names appear to include multiple names, perhaps of families who lived in Seco at the time.

And there was a date – November 4, 1932 – and a place name. Mrs. Bivens had no idea where Seco, Kentucky, was, but there was Mrs. Short, her friend since 9th grade, her roommate when the two worked at the Navy Department in Washington, D.C. She lives in Kentucky, so Mrs. Bivens called her, and the two Nancy Drews (plus one, Mrs. Short’s daughter) started digging.

Mrs. Short found out that Seco is in Letcher County by reading about it on the Internet. She didn’t know where Letcher County is, but her daughter did. Ms. Williams works for the Kentucky Division of Forestry and had been here fighting forest fires. The two got in the car and drove to Seco last week. They toured the old Southeast Coal Company bathhouse and talked with artist and musician Debbie Tuggle, showing her the list of names transcribed from the quilt. She didn’t recognize the first names, but one last name did ring a bell. Lucille Gish.

She told the two visitors that the publisher of The Mountain Eagle is Ben Gish and he might know who Lucille was. He did. She was his grandmother.

Now the two are plotting a way to get the quilt back to him, since they have been unable to find the person who built the Bivens’s home.

“She feels real strongly that that quilt should be back in Kentucky,” Mrs. Short said.

And Gish, who was out of town when the two arrived, was happy to accept it.

“I will treasure it,” he said.

Just as Mrs. Bivens and Mrs. Short had hoped.

But their taste for detective work has been whetted by the search. The quilt may be on its way back to Kentucky, but there are still mysteries to solve. Clarence Lee Jones built the house in Gastonia in 1951, but little else is known other than that he sold the house to Truman Martin about 1962. The Bivens family bought it from him, but he had never lived in it. He rented it for two years to a woman with two children, but they don’t know her name now and don’t think she would have been the one who left the quilt. They assume it was Jones because he was said to have moved around quite a bit.

Old public records and city directories show he married Dorothy Dodge in 1948 in Mecklenburg, N.C. He worked as a construction worker for Duke Power and lived in the house on what was then Lower Dallas Road until at least 1960. What happened to him before and after still isn’t known.

But one day it may be. Rachel Short and Irene Bivens are on the case.