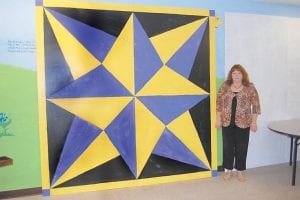 Jenay Hall, a librarian at the Harry M. Caudill Library in Whitesburg, recently painted an eight-footby eight-foot quilt barn square to be mounted on the Lillian Webb Memorial Library in Neon. Hall said the star pattern was painted purple and gold to represent traditional Neon colors. Legina Adams, bookmobile librarian, and Jenay Hall’s 17-year-old daughter, Tazsha Hall helped Jenay Hall paint the large square. Hall is now working on a large barn quilt square to be mounted to the back of the Whitesburg library. The multicolored design “Trip Around the World” will be installed before the Mountain Heritage Festival and will be visible from the new pedestrian bridge. (Photo by Sally Barto)

At least 25 large quilt squares will soon be painted and displayed on sides of businesses and barns throughout Letcher County.

“They are springing up all over the county,” said Ann Bradley, of the Letcher County Extension Office.

Sharman Chapman-Crane, facilitator of The Heritage Quilt Project, mailed letters in March to 60 organizations and individuals asking if they would participate in a barn quilt project. Those interested have been meeting at the Letcher County Extension Office at 4 p.m. on the first Tuesday of each month.

“The response since March has been incredible,” said Chapman- Crane.

Donna Sue Groves, of Adams County, Ohio, is credited with having the first quilt square placed on a barn in 2001 in honor of her mother, an avid quilter. Members of her community liked the idea and added more quilt squares. Now 400 quilt squares are visible on barns and other structures in 23 states across the nation.

“It stirred so much interest that tourists came from all over to see those quilt squares,” said Ked Sanders, who is painting several barn quilt squares. 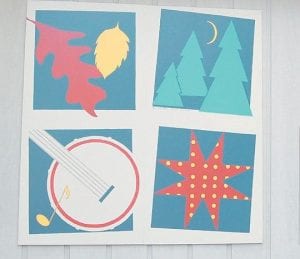 “It has taken off like wildfire,” said Chapman-Crane. “Everybody is excited about doing it and we are talking about claiming our quilt heritage.”

Several barn quilt squares are already on display in the county. One containing geometric shapes is on the outside of the Eolia Christian Community Outreach (ECCO) building. A square with a coal miner and a Southern belle is on the stage at Eolia Community Park.

Sanders is painting an eightfoot by-eight-foot square entitled “Stained Glass” that will be installed on the Whitesburg City Hall building before the end of September.

“Requests are coming in faster than we can paint them,” said Sanders.

He said the Letcher County Red Hat Society, Appalshop and the Appalachian Regional Hospital have asked him to paint barn quilt squares.

Richard Smith painted and mounted a square on his mother Stella Elam’s house near the twin bridges at Letcher on Route 7.

A four-foot-by-four-foot square with the image of an eagle, created and painted by Mitch Whitaker of Roxana, is located on his grandfather’s barn near Highway 588. Whitaker, who is the only “master falconer” in Letcher County, keeps a Red-Tailed Hawk in the barn.

Whitaker said he drew about 10 different designs on grid paper until he created the one he liked best.

“The pattern I came up with could be made into a quilt,” said Whitaker.

Whitaker, who finished painting the barn quilt square on August 30, said the project took about a week to finish.

“Each evening I would paint a different color and let it dry,” he said.

The Crafty Cut-ups Extension Homemakers Club is in the process of painting a bear paw pattern using brown-, orange- and creamcolored paints. The six-foot-bysix foot barn quilt square will be mounted onto the Hunsaker building, owned by club member Carol Hunsaker, in downtown Whitesburg across from the Hoover’s Home Furnishings building.

Kathy Napier, president of the Crafty Cut-ups, said several members of the club quilted a bear in the woods quilt and liked the bear paw print from that quilt pattern.

“It’s traditional, old timey and related to the mountains,” said Napier. “We just liked it.”

Napier said the group of 15 was excited to participate in the project.

“We thought this would be a good project for the whole county and we wanted to be a part of it,” said Napier.

An multicolored eight-foot-byeight foot barn quilt square called “Trip Around the World” will be mounted to the back of the Harry M. Caudill Memorial Library in Whitesburg.

“We thought it was a wonderful idea with the traditions of quilts and the mountains,” said Jenay Hall, children’s librarian and circulation librarian of the library. “It is going to help with tourism. We just wanted to participate.”

The Blackey Library will have a square made in honor of the late Gaynell Begley.

Jeff Chapman-Crane will create a pattern for Route 23 Country Music Highway in honor of Gary Stewart, who was born in Jenkins.

Art classes at Jenkins High School are creating a square to mount on the Jenkins Independent Board of Education building.

Some are supplying the location to display the barn quilt square and others are creating and painting the pattern.

“If you are aware of them, you’ll see them everywhere,” said Whitaker.

Four-by-four sheets of fine board can be purchased at the office of the Mennonite Central Committee in downtown Whitesburg for $52 each.

“In a lot of states this has become a big tourism thing,” said Chapman-Crane.

Chapman-Crane said a brochure will be made detailing the GPS locations of all of the quilt barn squares in the county to make it easier for county residents and tourists to drive around the county and find the barn quilt squares.

“A tourist will be able to drive all over Letcher County — sort of like a treasure hunt — and find the quilt squares and take photos of them,” said Sanders.

For additional information on how you can become a part of this project, call Sharman Chapman- Crane at 633-5065 or Ann Bradley at 633-2362.