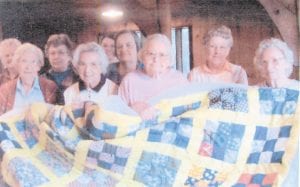 QUILTERS – The Cowan Homemakers and friends recently tacked a quilt pieced by Arvie Boggs at the Cowan Community Center.

Seems like our winter season has gone by fast as I have said before. “Can’t hardly believe it is springtime again.”

Several from the Little Cowan Church attended the Shriners’ dinner on Sunday. They had a good turnout and appreciate everyone who came.

Best wishes to Jeanette Day, Jack Day and others who haven’t been feeling well. We missed them at church and all the others who were unable to attend.

Kay Amburgey of Lexington, enjoyed a nice visit with Marsha and Carl Banks, her son Gregory, and other relatives and friends.

Brandy Sexton is enjoying her spring break from Alice Lloyd College. Brandy and her parents, Allen and Betty Sexton, have been our neighbors since she was two years old. They have become a part of the family. We have been blessed with good neighbors.

The Cowan Homemakers and friends tacked another lovely quilt at the community center. Arvie Boggs had pieced the quilt from remnants of vintage prints she had used to make dresses for her mother, the late Pearlie Pack. The ladies were happy to have a visit from the students at Cowan Head Start. The children were very interested in learning about how the quilt was put together, how the frames and clamps worked, etc. This was an activity associated with their theme for the week, which was warm bodies. What better way of keeping warm than a good, soft, warm, homemade quilt.

After prayer meeting on Thursday night, the Little Cowan Primitive Baptist Church had birthday cake and ice cream for one of the ministers, Brad Dutton of Louisa.

The Pine Mountain Chapter of the Daughters of the American Revolution met at Dairy Queen in Whitesburg on March 13. Mahala Frazier was in charge of the program on student achievement in the area of American history. Her guest speaker was her grandson, James W. “Trey” Craft III, a sixth grade student at Whitesburg Middle School. He spoke on the social studies section of the CATS test given to all fifth graders in Kentucky and his award of distinguished on that section of the test. He also told about winning first place in the district and regional competition in social studies in the Governor’s Cup. He is a member of the quick recall team in academics at Whitesburg Middle School.

Trey shared experiences of a family trip to Boston last summer where he visited historic sites which included the U.S.S. Constitution (Old Ironsides) and the Old North Church where he sat in Paul Revere’s pew.

New members in our chapter are welcome.

Hope everyone has a nice week.