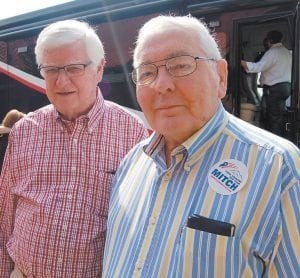 R.C. Day Jr., right, was photographed with U.S. Rep. Harold “Hal” Rogers during a campaign event for U.S. Senator Mitch McConnell in 2014. Day, who died unexpectedly at age 82 Saturday, served as Whitesburg Postmaster for 20 years after being appointed by President Dwight D. Eisenhower in 1960.

Mr. Day, the son of postmasters in Day, now known as Ran Day Hollow in Cowan, began his career in the U.S. Postal Service on Sept. 2, 1960 as postmaster of the Whitesburg Post Office, after being appointed by former President Dwight D. Eisenhower. When Whitesburg Post Office began city delivery, Mr. Day named some streets and created many of the postal routes still used in Whitesburg.

He served as Whitesburg postmaster for 20 years before being promoted to postmaster in Somerset on Feb. 8, 1980.

In 1975, Mr. Day served as president of the Kentucky Chapter of the National Association of Postmasters of the United States (NAPUS). He served as vice president of Kentucky NAPUS from 1986 to 1988.

While a member of the executive board of the National Association of Postmasters, Mr. Day spoke at several state conventions including Alaska and Maine. 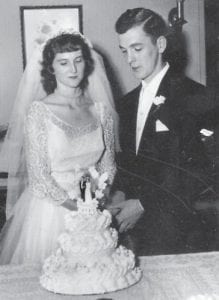 R.C. Day Jr. was married to Frances Austin of Wellford, South Carolina in 1953 after the two met at Berea College. The late Mrs. Day was a well respected teacher in the Letcher County School System.

In 1986, Mr. Day was named Kentucky Postmaster of the Year.

“He did love the postal service,” said Stephen Day, a son of Mr. Day. “For him it was about the civil service.”

Mr. Day was also editor of “The Kentuckian”, a magazine for Kentucky postmasters.

He retired from the U.S. Postal Service in 1990 and became a substitute teacher at West Whitesburg Elementary School, where his wife, Frances, taught reading and was in charge of the gifted and talented program.

Day met Frances Austin, of Wellford, South Carolina, while they were both students at Berea College. The Days married in 1953. Mr. Day was graduated from Berea College in 1954 with a degree in geology. He then served in the Army during the Korean War. He taught biology, science and geography at Whitesburg High School before becoming postmaster.

Jack Burkich, who taught at WHS with Mr. Day, said he was a “super science teacher.” 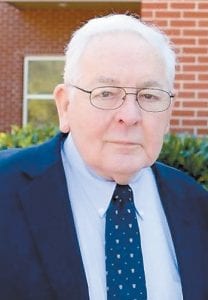 “He knew what he was doing and was on fire with it,” said Mr. Burkich, who lived near Mr. Day. “He had kids interested in learning.”

Dr. David Narramore, a Whitesburg dentist, said Mr. Day was a devout Republican and advocated and exercised the right to vote.

“He came to vote in the Presidential Caucus on Saturday in his final hours with his bright red ‘Make America Great Again’ hat to let everyone know he was supporting Trump,” said Dr. Narramore, Mr. Day’s cousin. “He was always adamant about people voting and always thought they should be voting Republican, that is if they were truly voting for the best person to do the best job in his opinion.”

Marsha Banks, a Democrat, said their political differences didn’t stand in the way of their friendship.

“He’s such a strong Republican, but a good friend,” said Mrs. Banks, a former WHS student of Mr. Day’s. “It is good to live in a town that is small enough that you can know everybody and what they stand for and love them even if you don’t agree with them. This town will miss him.”

“If he missed, he always made it up,” said Mr. Burkich. “He was faithful at doing that.”

Mr. Day, a former president of the Whitesburg Rotary Club, was instrumental in bringing Dolly Parton’s Imagination Library to Letcher County. The program provides a book each month to children until their fifth birthday.

He participated in Cowan Community Center’s storytelling play, “Precious Memories” which was performed during the Mountain Heritage Festival in September. Mr. Day talked about the postal system and Letcher County’s Bull Hole, a place where defeated candidates supposedly go to sulk.

Mr. Day was an avid birdwatcher, fisherman and gardener.

He and his wife enjoyed traveling together. The Days vacationed in Hawaii in 1991 and traveled the western part of the United States in 2010. Mr. Day had been to 49 states, with Utah being the only state he didn’t visit.

He served on a committee for the Robinson Scholar Program at the University of Kentucky, which awards scholarships to first generation high school and college students in eastern Kentucky. With a firm belief in higher education, Day also helped several Letcher County high school graduates gain admittance to Berea College, his alma mater.

“He helped different people at different times based on what their needs were,” said Stephen Day.

Mr. Day was a deacon of First Baptist Church of Whitesburg, where he previously served as superintendent of Sunday School.

He was a longtime member of the Appalachian Regional Healthcare (ARH) advisory board. He was a former trustee for the ARH chair of hospitals.

He was a charter member of the Whitesburg Garden Club, which he was president. He was a former Jaycee member and treasurer of the United Way.

In honor of Mr. Day’s retirement in 1990, Mrs. Day, who died March 11, 2015, wrote that her husband was a very energetic, thoughtful and sincere gentleman.

“He has used his talents and expertise well in his community, church and the postal service because he loves people and is very proud of his heritage,” she wrote.

“He maintained the history of the Day family in his head and could tell you how we were related to the Adamses, Pollys and everyone else in Letcher County,” said Dr. Narramore.

Funeral services will be held at 1 p.m. today (Wednesday) at First Baptist Church of Whitesburg. Burial will follow at the family cemetery.

Mr. Day is preceded in death by his parents, Bonnie and Randall “Ran” Day; his sister, Jennie; and his wife, Frances.