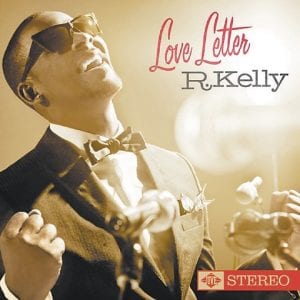 In this CD cover image released by Jive Records, the latest by R. Kelly, “Love Letter,” is shown. (AP Photo)

That may be a fair question to ask after listening to “Love Letter,” the brilliant new album from the self-proclaimed Pied Piper of R&B.

“Love Letter” is a gorgeous, 15-track ode to the various stages of love, drawing from a retro soul style and delivered with romantic grace. While there’s no doubt Kelly is capable of musical greatness, the grace part might throw off some.

Kelly has produced some of R&B’s most poignant and moving songs but he’s better known for his salacious sexual grooves. Over the last few years, those songs appeared to be Kelly’s only specialty, turning the multidimensional singer-songwriter-producer into a one-note, tired act.

But the genius of R. Kelly has been resurrected and is on full display on “Love Letter,” which echoes Sam Cooke, Teddy Pendergrass and even a bit of Luther Vandross for a grown-folks love album that won’t shock the parents or scare the children. The first single, the epic “When a Women Loves,” is a tour de force that not only puts Kelly’s wondrous songwriting on display, but also showcases a voice that has little competition when it comes to pure power and passion.

That song represents the album’s masterpiece, but there are plenty of masterful moments throughout. “How Do I Tell Her” is a moving tearjerker about a leaving a loved one, while “Music Must Be a Lady” is a sensual missive to what may be Kelly’s greatest love. The percussive “Taxi Cab” is the album’s raciest track, but after hearing about Kelly’s sexual exploits in the kitchen, cars and elsewhere, a song about making love in a taxi sounds downright quaint.

The album ends on a bittersweet note with the bonus track “You Are Not Alone,” the No. 1 hit he wrote for Michael Jackson. As Kelly sings it, it becomes less of a love song and more of a mournful, beautiful remembrance of a departed loved one.

“Love Letter,” reminiscent of Kelly’s 2004 CD, “Happy People,” is one of the best albums of his career, and may be among the best of the year. Here’s hoping that those turned off by his crass material of late will pay attention to this classy, and classic, gem.

CHECK THIS TRACK OUT:
“Radio Message” is an old-school sounding plea for forgiveness disguised as a radio request; if only all radio requests sounded this good.