Race for judge will include Craft, Hall 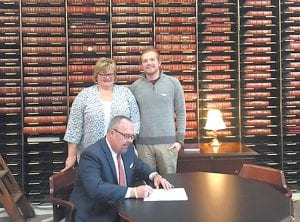 FIRST TO FILE — James “Jimmy” Craft II, of Eolia, filed to run for Letcher Circuit Judge on January 8. at the secretary of state’s office in Frankfort. His wife, Kim, and son, James Craft III, are also pictured.

James “Jimmy” Craft II, of Eolia, filed to run for office on January 8., with his wife, Kim, and son, James Craft III, by his side.

Darrell Hall, of Whitesburg, and his wife, Nyoka, are expected to travel to Frankfort today.

For 21 years, Craft has had a private law practice in Whitesburg. He is a 1986 graduate of Whitesburg High School. He was graduated from the University of Kentucky in 1990, and from Western Michigan University Thomas M. Cooley School of Law in 1994.

Craft served as the assistant Letcher County attorney from 1994 to 1998. He was elected president of the Letcher Bar Association in 1995 and currently holds that position.

Craft is the son of James W. Craft and Mahala Frazier. His daughter, Dr. Rebecca Cook, and her husband, Calviston Cook, have one child, Rhiannon. James Craft III is a student at the University of Kentucky.

In 1981, Darrell Hall opened his private law practice in Whitesburg. He is a 1974 graduate of the University of Kentucky and a 1981 graduate of UK College of Law.

Hall has served as the attorney for the Letcher County Board of Education since 2000. He is a former member of the Appalachian Regional Healthcare advisory committee.

The filing deadline is January 26.

Notices of the circuit judge vacancy will be sent to Letcher County attorneys once Gov. Matt Bevin appoints lay members to the Judicial Nominating Commission.

Four citizen members will serve on the Judicial Nominating Commission with two local attorneys and Supreme Court Chief Justice John D. Minton Jr. The two attorney members, Jimmy Craft and Gene Smallwood, were elected by local members of the Kentucky Bar Association. Minton serves as the chair of the commission.

The commission will review questionnaires and interview all applicants before recommending three names to Bevin. Once given the list of nominees, the governor has 60 days to appoint a circuit judge or the chief justice will appoint a judge from the list of recommendations.

The appointed circuit judge will serve that office until an election is held in November.